Monkey Tennis is a game about monkeys playing tennis with a huge variety of different species of monkeys and a control scheme with an immense learning curve. This is an app for the iPhone, iPod touch, and iPad by SDGames for $0.99 with a Lite alternative (8/18/10). There is a lot to the concept behind Monkey Tennis.

This game really showed potential. During my researching of this app, I saw in the AppStore all these positive reviews and it really gave me high hopes for this game. There is a huge variety of different moneky species in the game and it has convenient options for gameplay like how many games per set, sets per match, and what type of field types you can play on (grass, clay, hard). 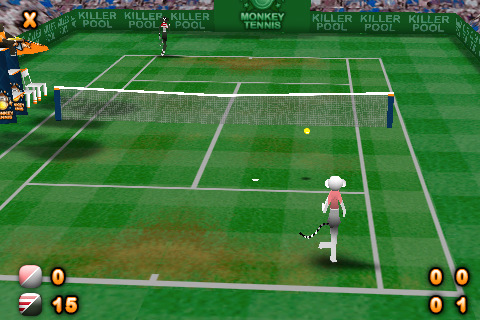 Graphics are alright. Nothing special really. Stages are bare and lifeless with no details besides the lines in the play field. The crowds are flat and oddly gray and the characters are essentially re-skinned versions of the same few models. Sounds are usually nonexistent except when you miss the ball or really mess up a serve and the monkey makes a screeching sound.

Controls are ridiculous to try to learn. Movement, direction, and strength are controlled with swipes of the screen. I can’t tell you how long it took for me to finally win a match. It took me over 15 matches to finally be able to win consistently. What I mean by this is that I was not winning due to poor enemy AI or lucky shots, but with actual skill… or rather taking advantage of the slower opponent by shooting from one side of the field to the far other side and winning consistently because the AI can’t keep up.

The character selection makes me really wonder why you would even bother with 30 something characters if you show no stats for any of them with no information like speed/strength, or preview of what they look like. The game doesn’t give you character selection screens; it gives you a drop down menu. I’d rather see 5 or 6 really unique, really well done characters rather than 30 generic, unknown characters. The art of the title screen with the colorful 3D monkey looks more fun than the game itself. Maybe 2D sprites moving in a 3D plane would allow for more colorful characters and more visually appealing environments?

The graphics are plain but the controls are really good after you finally get adjusted to them. The characters are all just the same with very minor unexplained stats. What this game needs is to narrow down the really unique species and put them into a character selection screen with actual explanations of their strengths and weaknesses. Right now it feels like an unfinished, unpolished, game, but it’s a start. I really hope that this game gets far more work put into it because right now, its presentation is lacking.