Released by Bounding Circle, Fetch up is a fruit catching game for the iPhone, iPod touch, and iPad and is free at the time of review. You are an alien and you are left stranded on an even more alien planet. To survive, you must collect fruits as a food source and luckily this world is raining fruits! Stealing fruit seems to be a major no-no on this planet as they send cannon firing robots after you! 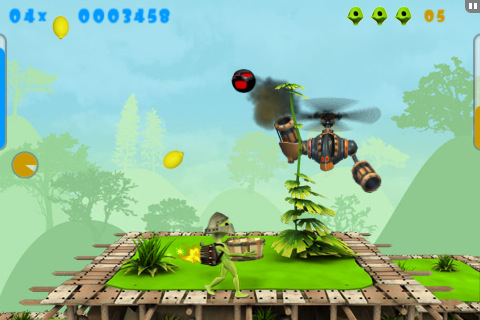 You control your little neon colored alien by tilting your iDevice. Tilt left to move left, etc. Your goal per level is to collect fruits that fall from the sky. You have a helmet on so if the fruit hits your head, they will bounce once for a second chance to catch the fruit. There will be alien sentry bot things that fire cannon balls at you. Avoid being hit while collecting more fruit and powerups.

The graphics have a calming color scheme. The background is a lovely green/light blue color with faded trees in a stylish flat appearance. The foreground has your wooden platform that has an extremely detailed appearance. It all looks really good and the 3D is well done. I like the ambient occlusion look to the stage since it’s rare to see the effect on iPhone games. The main character does tend to blend into the rug thing a lot, but the basket is what you are concentrating on, so it doesn’t hurt the game.

The game comes with 3 difficulty levels which is useful, but the game is most fun in the normal difficulty. You get the helmet protection instead of the hard mode stun that you will suffer each time you get hit by the fruit. I wish that the hard mode setting would increase the intensity. The enemies could fire more frequently and maybe even fire straight at you for some extra frantic dodging. This app is Openfeint enabled. 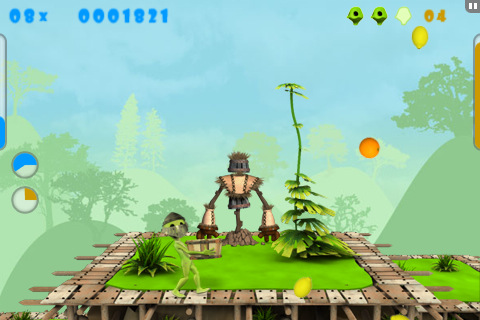 This game has a charming appeal but could use some minor improvements. The 3D is great but the main character seems to lack personality. I would suggest a less proportionate body type like maybe a cartoony sprite to give it some charm? The story could also use some development. Maybe instead of fruits, you can collect rocket ship parts like screws, bolts, and parts so that you can build a way out of the planet. That would be a good way to add some personal involvement to the motivation of the character.

FetchUp received quite a bit of scrutiny in the AppStore for a white-screen crash issue. If your game is having this issue, to resolve that connect to the game with no internet connection first. After that, you can enable your internet connection and the game should work without the crash. This should be fixed by now with the 1.0.1 bug fix.

Don’t let the AppStore comments sway you. Fetchup is a good game with very nice graphics. It just got a lot of 1 star reviews made because of a white screen issue. Undeserved and a shame. Gameplay has tons of potential for different levels and alternate items to catch. You can do a lot with the theme of an alien on an alien planet. I mean, that’s twice the unknown! If you like catching games, try this game out. It’s free and is quirky. Can’t wait to see what new content Bounding Circle could release for this game.