Like the Atrophy Studio’s Traffic Flow which we reviewed a while back, AN Grupa has created another way to release some stress from the daily traffic grind of driving around a busy city. Yield is a traffic controlling game where you manipulate the stop signs for cars to pass. Your goal is to pass cars safely through an intersection while traffic flows by. Yield is available for the iPhone and iPod for $0.99 and is available in a Lite version.

Apparently, whatever city this is has some of the worst drivers in history. They will drive nonstop regardless of what car is moving in front of it. The game is simple but challenging. You tap stop signs to allow your cars to travel across the screen safely. You have to take into consideration how fast the cars will start, how fast they drive, and the speed patterns of the intersecting cars. It’s all very challenging and done well. There are bonuses you can collect like Time bonuses or second chances when cars crash. 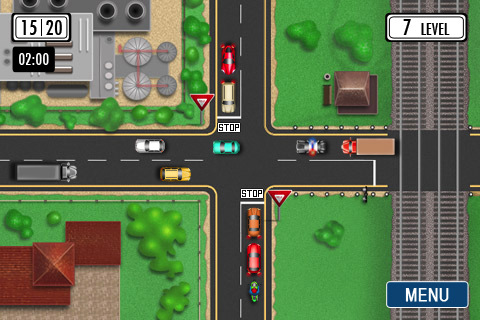 The graphics are surprising. There is a funny movie that plays at the start of the game with a silly car getting into an accident. The in game graphics are great with really nicely done vehicles, buildings, streets, and explosions. The game has a semi-GTA style look to it, which is nice.

There is a classic 70’s style music playing in the background, but the most you’ll hear is the sound of cars successfully passing the intersection, which is a car horn. I won’t say it’s annoying, but it is the only sound you’ll hear during most of the game with the exception of car crashes. The background isn’t bad, but it just doesn’t seem to fit the look and feel of the game.

Yield is entertaining, pretty, and features a small ‘how much can they crash’ feature if you fail a level where you can watch cars pile up hopefully and provide you with a calculation of how much the damage costs. Unlike Traffic Flow, which had a Crash mode where you fling cars to cause as much damage as possible, this is a far more realistic, but less exciting version of the Burn-Out mode. It’s not important to the game in anyway, but it does provide a way to relax after failing a level just because of one mistake or something. The game does get extremely hard in a short time, so beware of that. 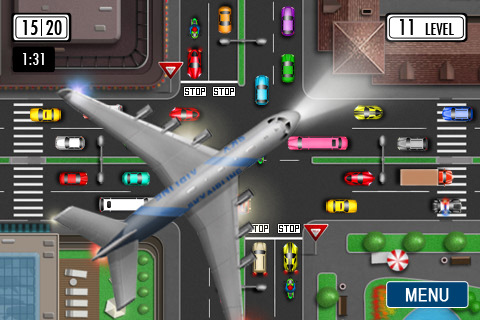 Yield is a solid traffic control game with great art but lacks a impactful or memorable sound effects and music and that excitement factor that was present in other apps I’ve played. Try its Lite form for yourself and check it out to see if you would like it. For me, it’s not perfect, but it’s good.