Take super samurai warriors, futuristic machines and combat in space, and you have one word: AWESOME. Does Samurai Man take this intense, interesting, and categorically cool concept and pull off a win? Samurai Man is a jumping platform game where you control a futuristic looking samurai as he jumps into space fighting robots, cutting through projectiles, and trying to go as far as you can go. Released by Yusuhiko Nakashima, Samurai Man is available on the iPhone and iPod touch, for $0.99. 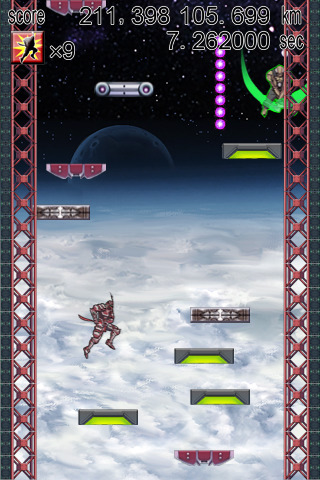 Let’s first talk about the art. The art comes in 3 very separate sections: The logo/title screen, the comic book, and the gameplay. The logo has a samurai that looks like a mix of Karas and a ninja, the title screen is genuinely impressive for its art. I wish it would have been some action sequence showing the samurai jumping up platforms slashing robots, but it’s decent enough.

In the game, when you unlock achievements, you get to check out some comic books! Most of the text is Japanese, though some parts are oddly translated. The art is sharp and distinctively stylized, with drama and action sequences and overall, the drawings are very nice, though I have to say that it takes a long time to unlock so you might never see all of the art pages.

Finally, we come to gameplay. First, the game is played like any other jumping distance game. You automatically jump, try to land on platforms and avoid enemies. You also have the ability to attack when you tap the screen, slashing your blade to destroy bullets and kill robots turrets or robot ninja/samurai. The art during the gameplay looks like something from the older SNES/Genesis. Your character looks good and the robots all have unique appearances. The attacks that the enemies shoot remind me of bullet-hell shooter games where the bullets come out in insane bunches and patterns, though it’s a whole heck of a lot more manageable thanks to your bullet-canceling sword. 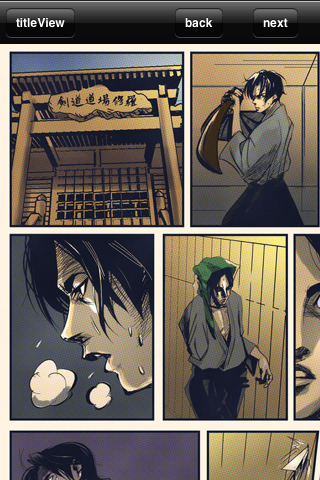 Music and sounds consist of fast rockin’ techno and sword slashes. It’s fitting, to say the least, and the game really does remind me of Ninja Gaiden in some ways. The slashing is actually the main thing you’ll be hearing because not attacking would be pretty much a death sentence. Each time you get hit by a bullet, you freeze up and fall, which is very bad around the constant death drops.

Samurai Man could use some more development. When I played NinJump, powerups, massive explosive effects, and other added elements really make the jumping genre feel dynamic, exciting, and visually pleasing. I realize that this game is a huge throwback to the 16-bit era, but this samurai has so much potential. Since he holds a weapon, imagine the possibilities! Axes, double swords, maybe a robot horse of awesome that jumps higher for you while you are riding it, maybe special armor that uses the bullets to launch you upwards? It’s a lack of content that makes this game feel generic, though entertaining.

Being a version 1.0, Samurai Man has the basis of a great 16-bit game for the iPhone or iPod touch. It’s entertaining and the comic is really well drawn. I personally love the title screen drawing and it’s fun to read it’s iTunes description where it makes absolutely no sense and gives no excitement whatsoever, which is just great. I liked this one, but it needs far more work. This is another app that I’ll be watching to see how it grows and develops.