In real life, I hate pickpockets. I hate thieves, looters, burglars, muggers, and any other name you want to drop on them. But you know what I really like? The story of Robin Hood. Stealing from the rich to help the poor, running from the law in order to survive to do it again. LuckyLoot is a game app that has a poor young man ransack citizens of a rich city in order to save his own town of bankrupt citizens. Created by RavenMyth Interactive, LuckyLoot is available on the iPhone and iPod touch for $0.99.

LuckyLoot is a Isometric view timing game. The way you play is guide the little big-headed thief around with a joystick, go near a citizen and pickpocket them by tapping the ‘steal money’ button when a scroller at the bottom of the screen hits a ‘sweet spot’ somewhere random on a bar. Land it correctly and you steal the money. Fail and you’ll get beaten up or possibly arrested. 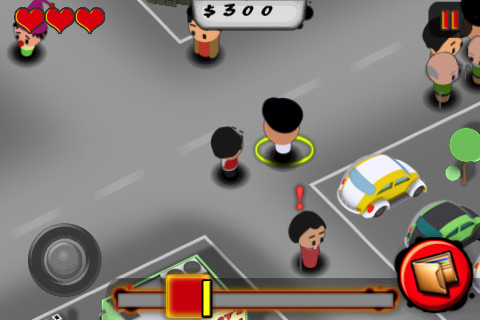 I had some fun with this one. The graphics are really good with a nice ambient occlusion style shadowing to all the 3D elements, giving things a softer look while accenting the corners of the two-tone houses or giving smaller props some accenting. I really appreciate good 3D when I see it, and this one reminded me of Katamari Demacy fused with Sim City (which sounds like an awesome game by the way). The characters are actually appealing and cute. I like their little eyebrows that constantly make them look worried or bored.

The sound effects usually range from bleeps to boops and other random noises, but it’s somewhat memorable in its execution and the tone of the overall game is one of silliness, so I can go with it. The stealing mechanic is just a waiting game and tapping in the proper areas. Most of the time, it’s a quick steal, then waiting. You’ll spend a lot of time waiting for the bar to align up with the big red box area and the pacing really does slow down considerably during the waiting. You have to becareful too since there are other thieves running around who will pickpocket you when you go near them. It really sucks to have your money stolen because you ran into someone… oh the irony! 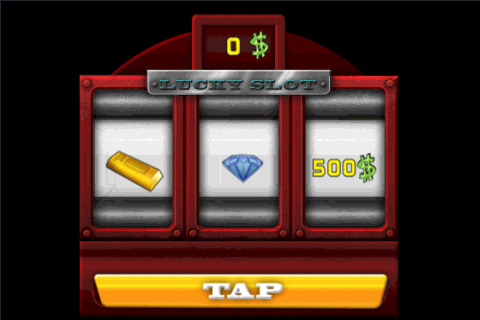 This was a solid game for the iPhone/iPod touch. Nothing was so flawed that it stood out like a rusty infected nail and the visuals were pleasant and very welcomed, though I have to say that the fuzzy shadow effect still needs some refining. Cars and random other objects don’t cast shadows on the floor and people have a super dark black circle around their feet that is way too dark for a shadow. The gameplay is decent but after the first level, you’ve pretty much played everything this game has to offer. Maybe some more content would spice this experience up, so for a version 1.0, this is a solid release. Look forward to seeing more from RavenMyth Interactive.