Retro arcade action! Tonight we’re gonna party like it’s 1984! With pets! In bubbles! Getting tired of the unnecessary exclamation points yet?! Yeah, me too. They’re utterly exhausting.

This quirky little game kicks video game graphics back about a quarter of century, but I’ve got a soft spot for adorable animals, and a pixelated chick is still cute in my book. Bubble Pets! is basically a kind and fluffy sort of arcade shooter in the style of Whack-A-Mole; you’re just firing bubbles instead of bullets. 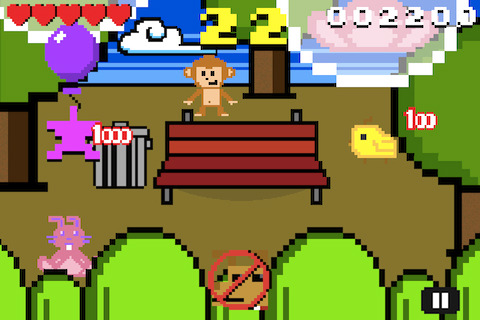 The game is very simple to learn, and you can pick it up very easily even with the uber-minimalist tutorial. For every level, there is a particular animal assigned that you want to avoid, say, a monkey. When animals start to pop up around the scene, tap them as fast as you can to encase them with a bubble, except the forbidden animal! There’s a constant picture at the bottom of the screen reminding you which animal to avoid, but your high score depends on a quick reaction. Don’t tap the forbidden animal, but don’t miss the other animals. 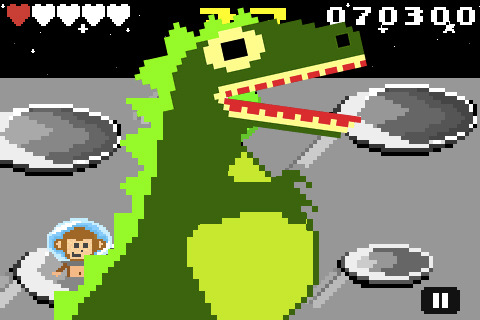 There are also various fruit power-ups to collect, and a special star power-up that gives you extra points. Occasionally there are bonus levels tucked between regular scenes that have you trying to pop all the animal-filled bubbles as they go floating past you for extra points.

Of course, it can’t all be sunshine and daisies, so there are also giant monster bosses that show up to get in the way and general create a ruckus. They don’t hurt you, but they block your view and cause you to miss animals in the most irritating manner. You can rapidly tap on them to try to get them out of the way, and you’ll get a hefty bonus if you manage to defeat them.

The game starts out gently enough, but the action ramps up fairly quickly. In fact, the game gets downright hard after not very long, and unfortunately the tap sensitivity just isn’t as good as it could be. It felt like I wasted far too much precious time repeatedly tapping the same spot over and over again, but these were the only real issues I encountered.

In most other ways, this was a very addicting and satisfying little game. It doesn’t offer a lot of variation and gets repetitive fairly quickly, but it oozes retro charm with the pixelated visuals and jaunty chiptune soundtrack.

Here is a video demo of the Bubble Pets! app on the iPhone