Pachinko is a ridiculously popular game where you drop balls into a field of pegs that change its directions as it falls. You get something special if the ball then falls into the special areas at the bottom. aYa-Manku is a take on that concept. This time, you’re goal is to destroy the pegs with the ball and advance in level! aYa-Manku is a puzzle game released by Dust.Bit.Games and is an universal app for $0.99.

aYa-Manku is one heck of an interesting puzzle game. Take the basic concept of Bust-a-Move (aka. Bubble Bobble) and spin it on its head. This time, you control the aim with your iDevice. When you shoot a ball from one of the two ‘cannons’ you must destroy all the circles in the center of the screen with a limited amount of balls. You gain balls by destroying the circles and ‘collecting them’. You can collect two different balls that give you multiple chances to complete a stage. As you finish stages, you climb upwards. 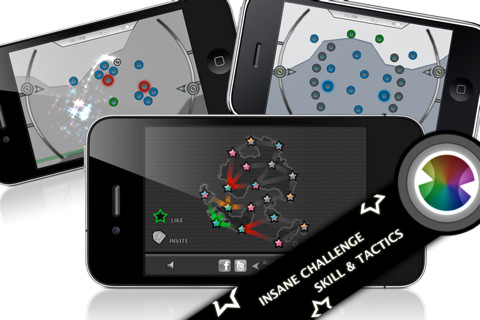 Graphically, the design of the user interface, the use of grays and particle effects, and the way the circles are laid out are all very well done. aYa-Manku gives us cute little emoticons that inform us how to play and give us small narratives. Graphically, this is a pretty good presentation. It was a also a nice touch to be able to see all the previous levels when the ball falls. It’s like the stages never cuts off. 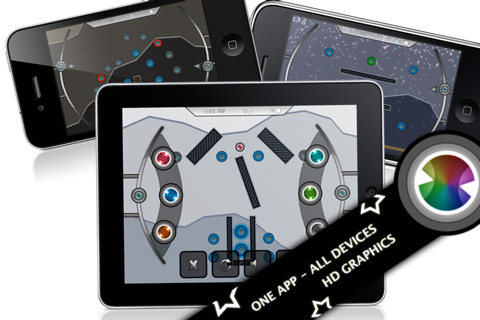 Controls could be better. The tilting to aim is alright, even though it’s slow and awkward. Again, more options like sliding the circles with your fingers would have been appreciated. You also charge your shot by 3 strengths before shooting. The longer you hold, the harder the ball will fly. While most games like these don’t give you predicted trajectory lines, this is a game with limited ammo. I would have really liked to be able to at least see how the charged strength factors into my shot’s path.

I feel like there are some ‘ugh’ moments in aYa-Manku. When you first start, you see a screen with stars and paths. No matter what I do, nothing happens until a tutorial dialog box appears. It’s a slow box so you’ll end up being confused for a few seconds before anything can get started. Weird. I noticed this lag of the dialog boxes in other parts of the game too. The menu can only accessed by sliding your finger from the bottom of the screen upwards… which, in game, means you will more likely move the camera down instead of being able to quit the stage, reload a stage, change the sound settings, or check in with OpenFeint. It’s completely unreliable and extremely annoying when the menu doesn’t register my finger sliding.

aYa-Manku is a decent game overall. The graphics are very nice, the gameplay is strong and addictive, and its controls, though limiting, are functional. The user interface could use some improvements and the menu needs a button. Please. Just in the top or bottom corners of the screen… a little button that reads ‘Menu’ or something. That would be great. A nice twist on the bubble-popping puzzle game and I think it’s worth a try. At least they don’t charge extra for the iPad version!