Frogs are gross. They are slimy, they have nasty long tongues, they can jump at you and stick to your body, and they do that gross under-chin inflating thing. That’s just gross. However, any game that pits the frog in a life or death battle against snakes, lemurs, and chameleons is already starting off positively for me! Croak is an arcade style game where you jump around dodging enemies, collecting insects with your tongue, and collect different skins for your frog and your enemies! Released by Rather Odd Computing, Croak is available on the iPhone and iPod touch for $0.99 and a Lite alternative. 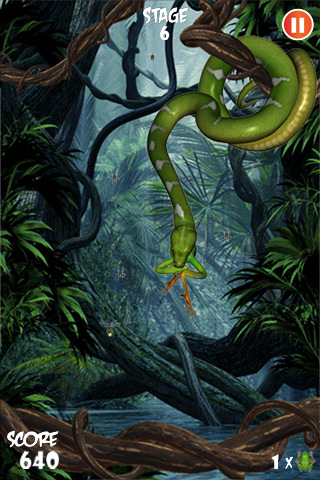 Graphically, this is a spectacular looking game. Some 3D elements remind me of PS1 generation CG renders, and others remind me of Uncharted (a huge compliment btw). The lush backgrounds misted wit the cheesy 3D effects make for a nice overall feeling. Animations however are usually stilted and blocked out rather than actually animated. It’s like looking at storyboards that try to kill you. 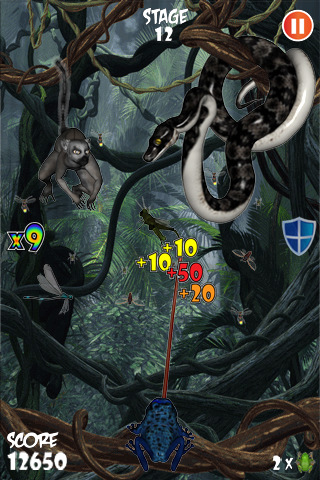 Croak has different skinned enemies with a wide variety of species of bugs to eat enemies, and frogs to control. Some bugs grant you special powers like a shield, multipliers, or extra lives. All the enemies have a certain pace and predictability, but the game is still challenging… and unfortunately, not in the way I would like.

The enemies are extremely hidden in the game. The backgrounds are extremely busy, though beautiful, but enemies blend in, it becomes crazy busy to see while the flies are hovering around, and even your frog can blend into the colors. This is especially cruel for a colorblind person like me.

Controls are rather stiff and delayed. You have to tilt the iDevice to move the frog and most of the time it takes about a full second before the frog will move. In a game with lots of enemies attacking you, this is a problem. I would have liked some instant movement alternatives. Maybe a slider at the bottom, touching the 3 spots and having the frog jump immediately to those spots, or maybe just some type of left-right arrow system.

Croak is a fine arcade game but needs some improvements to make the experience more pleasant. The selection of skins doesn’t feel important or like it changes anything. Reskins are nice, but wouldn’t it be nice to see some game-changing skins? Maybe my frog can be faster or the enemies could attack differently? Try this game out for yourself since it has a Lite version, but don’t expect to be blown away by the gameplay.