Although it was released a bit late for Halloween, the “holiday” themed, discovery game Doodle Devil is a nice little evil counterpart to JoyBits’ smash hit, Doodle God. If you’ve already played Doodle God, there’s not much new here, but it may appeal to those who prefer a darker slant to their games. Rather than thinking of them as separate games, it’s probably more useful to imagine them as different versions of the same game, like Pokemon Diamond and Pearl.

Although Doodle Devil doesn’t change up the formula much, it still has all the delightfully fresh one-finger gameplay and fantastic illustrations of the original game. Currently, it comes with 107 elements organized into 11 different categories, noticeably fewer than Doodle God, but I imagine that later versions will prove every bit as comprehensive as the original. If you’ve played Doodle God previously, then you might be disappointed at how little new content there is, but if you haven’t then Doodle Devil will come as a treat, since the innovative gameplay and presentation pioneered by the original is still there to charm and delight. 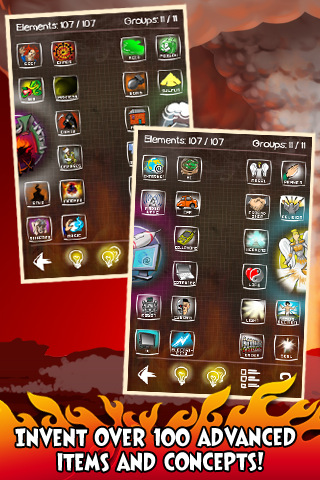 To play, all you have to do is combine elements together to create new elements. Now don’t worry; these aren’t the elements you learned about in chemistry class, and there are no equations more complicated than X + X. In fact, the first two elements you start with in Doodle Devil is “Human” and “Apple”. Naturally, combining the two gives birth to glorious “Sin”, which should give you an idea of the basic flavor of the game.

The main difference from the original Doodle God is that, unsurprisingly, Doodle Devil is quite a bit darker. While many of the elements are the same, there are a fair number of new elements included, and you can expect to encounter more sex, death, and violence as you progress. Of course, the little icons depicting the elements aren’t particularly graphic or distasteful, but along with the redesigned background and creepy soundtrack, the overall effect is one of gleefully wicked mischief and mayhem. 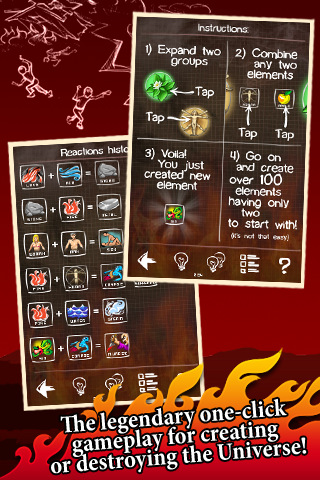 Replay value is limited once you’ve discovered all the elements, but getting to that point can take you a good long while, since finding new elements becomes harder and harder as you progress. There is a slowly recharging hint system included, but it’s still easy for frustration to set in towards the end of the game.

Overall, I would say that while it’s not great as a sequel, and it does unfortunately become less fun the longer you play, Doodle Devil is still a fun diversion. Easy to play, super polished, and with a fantastic sense of humor in the quotes that display with each new element discovery, there’s a lot to love about Doodle Devil, despite its flaws. If you’ve played Doodle God previously, you can probably give this one a pass, but you other little devils should think about giving this one a shot.