Look-Up is an augmented reality UFO fighting game for the iPhone 4 from Soulbit7. If you’re not familiar with AR games, you basically see the live camera view from your iPhone and objects are placed on top of the real world that you can interact with. In this case those objects are UFOs flying around, mostly up in the air, hence the name of the game, Look-Up.

Once you open the game you can choose either a 360 degree game or 180 degrees. In the 360 mode, you stand up and fight UFOs all around you. Keep in mind you will most likely look very funny and or weird if in a public place, doing spins and looking up in the air for no apparent reason. For a little less movement and stress try the 180 mode where you can just hit targets coming at you from one direction. 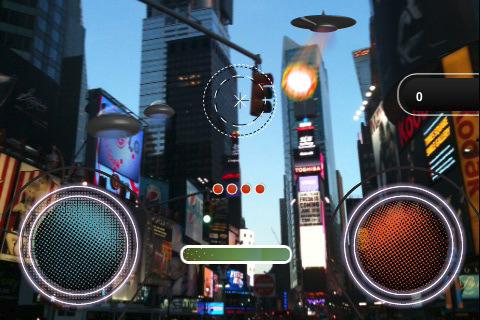 Look-Up walks you through a tutorial that shows you how to hold your iPhone 4, how to spot the aliens and how to lock them into your viewfinder. The action takes place using two buttons: The red one is for firing lasers, and the blue one is for using a tractor beam force field to suck in objects, as well as for launching the all mighty H-Bomb and G-Weapon.

The game has 3 modes of play:
Multiplayer: Here you can partner up with other iPhone 4 users via Bluetooth to fight aliens.

Hold ‘m up: Non-stop barrage of aliens to kill

Invasion: 9 levels of battle with a growing selection of features and aliens that want to destroy Earth. 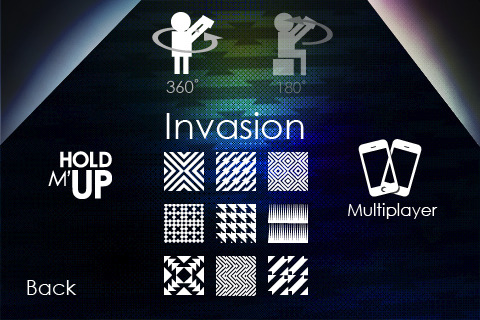 Playing the Look-Up game takes practice. There is an enemy tracker that shows you dots to alert you of aliens in your surroundings. Find them before they start shooting. Move the iPhone around, up, and down. But you have to learn to keep a steady hand if you can and avoid moving too fast. It’s easier said than done. Once you see a UFO or another object of interest, try to focus them in your target in the middle and fire away. There are some things you want to absorb instead using the left button. The plus icon gives you more life, the H-Bomb kills many aliens and Gravity weapon sucks enemies to your laser shots.

Overall, Look-Up is a well designed augmented reality fighter and the objects blend with the real world quite nicely. Gameplay is enhanced by a full soundtrack fighting sound effects. Definitely worth checking out if you have an iPhone 4 and even better if you’re willing to try it out outside at various public locations. Keep in mind it doesn’t work on iPod touch or iPad, or older iPhones.