Ah, Chess. The game of strategy, prediction, and thinking 4 turns ahead of your opponent. Here, we have a 3D presentation of the classic board game. Play online, hit achievements and go for the leaderboard! E.G. Chess, released by Kris Arndt, is a universal app for $0.99.

There is only so much you can do with Chess. The rules are set, the pieces have their abilities, and the board has a certain number of spaces. So what does E.G. Chess bring to the table? Well, the 3D is actually quite good with individual pieces having a very nice amount detailing in the geometry, but textures tend to be muddy and a bit too compressed. They give you 4 different 3D Chessboards-Table combinations with the same scrolling background. Overall, each play zone is nice and distinct. Their icon has also changed from a patch ago due to recommendation from the app store comments and it looks far better than their old one, so good job on that one. 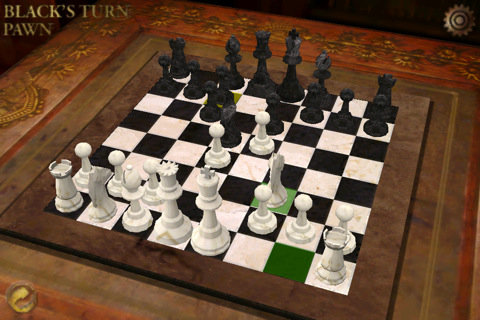 Controlling the pieces is done by tapping a chess piece, which highlights it’s square in red, and that piece’s possible moves are shown as red dots. Pawns can jump an extra space while in it’s original position, kings can exchange positions with the rook, and if a pawn lands on the opposite side of the board, you gain a queen. You can play against another player in local multiplayer or you can use its online matchup system against a friend. They don’t even have to be online in order to play since the game updates them on your move the next time they play which gives the app quite a bit of versatility. 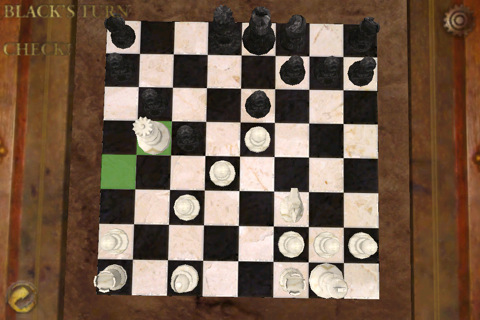 I personally like chess and I play whenever I could and this app allows me to play it like I was sitting at a table. I wish that they would give some more chess pieces however. One of the major novelties of chess is the different chess pieces. Wooden, crystal, glass, or maybe even orcs vs humans.

I never ran into any issues with E.G. Chess. Interface is fine, the CPU is challenging (and I never had any experience with the AI breaking), and with the new icon, this is an app that is getting more and more refined by the update. Excellently done Chess adaptation.