Free game? Why, yes! Sort of. Glu Mobile is helping to lead the charge when it comes to freemium games, thanks to Toyshop Adventures. A side-scrolling platformer, Toyshop Adventures gives you 10 levels of free 3-D action before asking you to open your wallet. This is actually pretty generous, all things considered. With a little more content than your average Lite version, Toyshop Adventures tries to give you enough game to sink your teeth into, but is it worth paying for? For a free game, Toyshop Adventures is actually fairly impressive, but it’s unclear if it’s actually worth shelling out cold hard cash for. 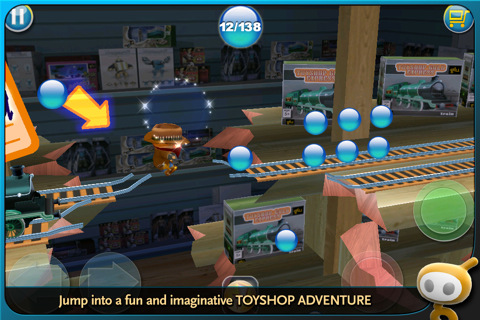 The story, if you can call it that, puts you in the role of a helpful toy trying to collect a series of marbles that have been scattered throughout the toy store. The characters and environments aren’t particularly memorable or distinct, but although the graphics won’t knock your socks off, they’re definitely on par with much pricier games and a cut well above most free offerings. The overall tone verges more on kid-friendly cutesy, but not in an especially obnoxious way.

Gameplay is on the simple side with rather short levels and very basic controls, but the touch responsiveness is at least decent. You get left and right directional buttons, a button to jump, and another button to attach a tether line to drag items around. Unfortunately, the physics engine is a little, uh, bouncy, so while you can interact with a ton of objects, and they respond roughtly how you’d expect, it feels a little bit like you’re on the moon. It’s clear a lot of work went into implementing the physics engine in a meaningful way, but the “floaty” nature of the gravity made the overall gameplay feel off. 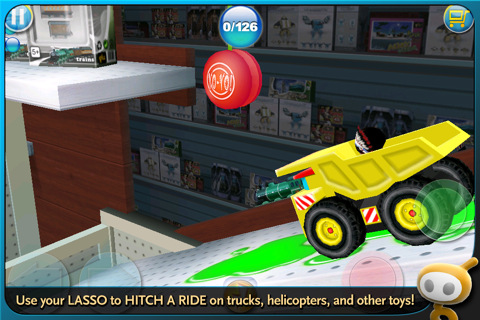 I was also a little disturbed by the rather cutthroat pricing approach to the freemium content. Through the in-game store, you can purchase crystal packs to use as in-game currency to unlock additional content, like more levels and special power-ups. Now, I fully understand and support a developer’s right to charge for their games, and the level packs don’t bother me, but when it starts charging players for one-time use only items, it starts to feel less good, particularly when it’s a game clearly aimed at kids.

In the end, Toyshop Adventures isn’t a bad game–far from it, but it’s not really good enough to inspire that visceral “MUST. PLAY. MORE.” response you really want if you’re going to bother paying for additional levels. Bottom line, it’s fairly decent free entertainment, but there are better paid options out there.