Hamlet or the Last Game without MMORPG Features, Shaders and Product Placement review

To be or not to be a quirky adventure game with only the slightest resemblance to anything written by the Bard? That is the question posed by Alawar Studio’s Hamlet, which may have the most obnoxious alternate title known to man. A short point-and-click that relies heavily on a unique art style and oddball humor, it blends puzzles with a rather unusual interpretation of the classic Shakespeare play.

For starters, instead of a moody Danish prince, you are instead placed in the role of a weird little time traveler. It’s probably worth mentioning that aside from the character names, the story is basically unrecognizable unless you think Shakespeare liked to include homicidal octopi or royal death metal riffs. 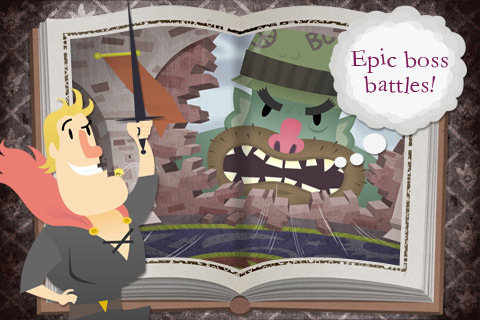 In any case, you, the weird spaceman from the future, have accidentally hit Hamlet with your time machine, so its up to you to save the beautiful Ophelia, defeat the wicked Claudius, and generally put things right again in the state of Denmark. This means solving puzzles, although not nearly as many as I’d like.

The game is broken up into 5 brief acts, and while the puzzles can be clever and cute, on the whole, they’re a little uneven. Some puzzles are a joy to untangle, while others are just an exercise in tedium, but overall, they’re all quite short. In fact, the whole game probably wouldn’t take you more than an afternoon, if that, which is slightly disappointing, but given the current price tag of $0.99, it’s not all that bad. 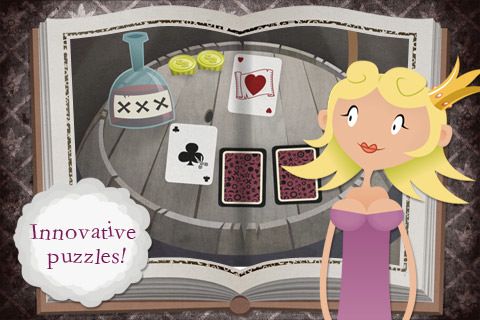 Even if the game is short, the art is definitely a sight to savor. Everything has a very old school, hand drawn quality, but not in the crummy doodle sense that has infected the App Store. These are very polished and professional illustrations with a whimsical Mary Blair kind of feel, like an old-fashioned children’s storybook. Unfortunately, Ophelia’s awkwardly illustrated womanly assets and the creepy Nazi-esque castle imagery in parts of the game struck me as very questionable images to include in what is otherwise a sweet and quirky adventure.

Adding to my disappointment was the lack of changing cursor, so most of the puzzles required a lot of random tapping to determine what you could interact with, and some of the puzzles were so exceptionally bizarre, you would only happen upon a solution by pure accident. The rechargeable hint system was mostly useless in almost every case, and I encountered a couple of bugs that caused the game to stall in weird ways. In one case, it wasn’t until I had closed the game in frustration and returned to it that I realized a bug had hidden the item I was looking for.

Overall, the misnamed Hamlet can be a fun little game, but it’s not quite perfect. Fans of Mystery Mania will probably most enjoy this lighthearted and lightweight adventure, although hardcore point-and-click lovers may find themselves mildly frustrated by the overall ease of the game and mildly inelegant puzzle construction.