Breakout, although not quite as famous as its spiritual cousin, Pong, is one of the oldest and best established video games around. Even if you never played the Atari original, you’ve likely encountered other versions of this basic brick breaking game many times over the years, although I would guess big-eyed, anime princess-snatching UFOs weren’t usually involved.

The original 1976 Breakout had rows of bricks arranged at the top of the screen, and the goal was to hit each of them with a Pong-like paddle and ball. It required cunning, skill, and an extreme patience for old-school graphics and software, but a lot can change in 25 years. 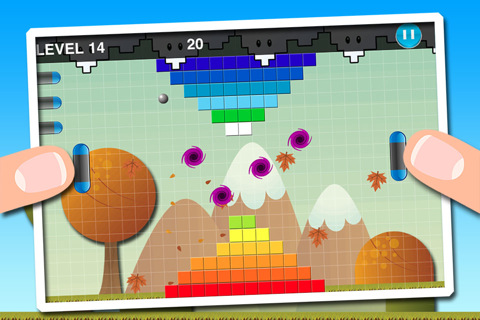 Today, the updated and fancied up Princess Breakout has flipped the game on its side, so you have two paddles set up ping-pong style, with a set of bricks in the middle, sometimes forming clever pictures, like a Mario-esque mushroom. There are also usually multiple balls in play, so a head for multitasking and nimble thumbs are a must. Keep an eye out for the many different power-ups that come floating your way as you bash your way through the bricks. And, of course, the utterly insane anime graphics are a far cry from the basic black and white designs of the past, and their zany nature will likely have you scratching your head more than anything else. 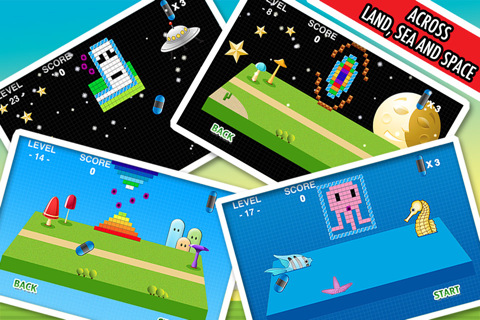 Aside from that, the gameplay is about the same: keep the ball on the screen and try to hit the bricks. It’s a very simple concept, but the game can be surprisingly difficult. For the most part, the game is pretty relaxed, with the balls moving at a reasonable pace, but I’m not very coordinated, so even when everything was moving at a crawl, trying to keep the balls from flying past my paddles was always an exercise in flailing panic.

For the veteran Breakout fan, I could see the two-paddle Princess Breakout version as a hearty challenge, but for clumsy folk like me, it was a little intimidating. I also had a tendency to accidentally cover the paddles with my thumbs, which sometimes made things a lot more challenging. I suppose it would be possible to play with two people on the same device, each wielding their own paddle on the iPad, but on an iPhone that would be an extremely cramped experience.

The touch controls are actually quite smooth, and the graphics, while rather nonsensical and absurd, are attractively colorful and Retina-optimized, but their sugar high nature might distract the Breakout purist. I was also a little frustrated that there was no easy way to find out what the 10 different power-ups did aside from use them, particularly since some of them are actually power-downs.

Overall, this is a pretty, but still basic twist on the classic Breakout model, but it’s a lot harder than I would have ever expected such a cutesy looking game to be, so go in expecting a legitimate challenge behind the pretty, pretty princess graphics.