When I first picked up the Moral Decay app for my iPod touch I was a bit excited when I saw the preview pictures, that in a way screamed “MAN” to me. There was blood, bullets, and a ripped guy with a huge gun in hand. As soon as I started this game I knew right away this was one of those ridiculously hard 90s shooters we all love and miss. Because of this, I pulled out my energy drinks and strapped on the seat belts for the hours of dying that lay ahead.

As much as Moral Decay is a pick me up and play game, it flaws in many ways I wished they could have fixed. I mean, sure, there is a variety of gun power ups, and exploding bodies to please anybody but this side scrolling, platformer is just too uncomfortable to play due to poor controls. Because the view of the game is so zoomed in, my thumbs would usually block trap holes and approaching enemies. I got shot at by enemies off screen and was afraid to back track fearing another pit hole. Unfortunately there isn’t a tilt style control nor is there an options menu to fix any of these problems. 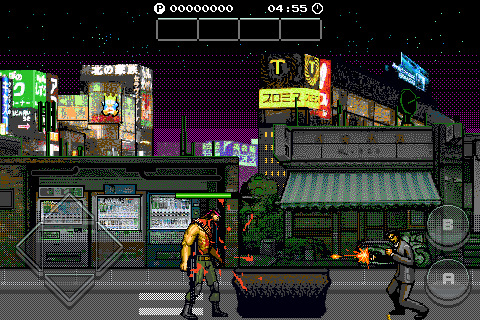 Again, this a is quick game were you can pick it up and play and for an inpatient person like myself who hates reading tutorials, this was perfect. The story however is terrible and it just throws you into the game which was fine with me, but the one thing that eventually got annoying was the terribly bad 8-bit music. Because it’s a tap to start type game with no menu, there was no way for me to disable any of the things I found bad.

Some of the major bugs were game crashes. When I would lose a life, at random my whole app would crash; I would be brought back to the main menu of my ipod. Another common bug is when I’m trying to jump out of explosions and accidently run into a bullet; my character is stuck in an infinite barrel roll. It is amusing to look at but after awhile you figure out you can’t jump anymore. At this point, it’s just game over because 3/4th of the game is pit holes and plat forming. All this can be easily fixed if the creators did more revision testing before submitting the game to the App Store. 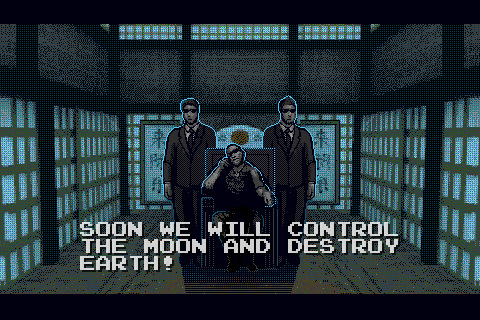 The positive marks I do have to give this game are its colorful imaging. There’s nothing better than seeing red blood squirt everywhere and a hand laying around, oddly enough this game is rated 12+. There are a variety of weapon power-ups to keep you from getting bored, and there are enough healing items to keep you from dying as quick as we used to playing Contra. However, all the weapon powers and health regen items drop at random and not from specific enemies. Theres no check points, so when you do die, you have to restart from the beginning.

If you have an extra $1.99 lying around and want a game to play while riding on a bus or to kill some time, this would be a game to try out. But if you’re the type who plays call of duty and sets it on normal mode, this is NOT the game for you. My overall experience with the game was frustrating but nostalgic. There are some flaws that if fixed, can make this app an awesome, nostalgic, classic.