Kissisland is a gaming app that follows a ruthless, barbaric alpha male as he terrorizes an island inhabited by a bunch of scantily clad, big-breasted females. The game essentially captures the fantasy of a hard-dying breed of men out there who are still caught up in the archaic view of seeing women as sex objects solely put on earth for their taking. The game was released by Viacheslav Iushchenko for an iPhone, iPod Touch, and iPad and will put you back $1.99.

The blonde military pilot of a wrecked spacecraft, John Starley, who plays our protagonist in this retrogressive game has a facial structure as chiseled as his sturdy body. He is the sole survivor of the crash and is now stuck on the curious tropical island. 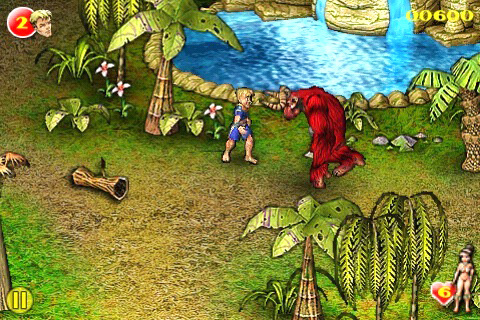 Adding to his discomfort, his protective suit has been ripped to expose his virile physique (oh my!). His first instinct, naturally enough, is to run after, grab, and kiss the lovely Amazon women that populate the island. I kid you not, the caption that goes with the picture of the pilot stumbling upon the Amazon is, “entranced to gaze upon the perfect female form of a young islander”. For every kiss the pilot gets, your score increases by 200 points. You help John Starley navigate through his fantasy by tilting your device. When you spot a nearly naked woman on the screen, tilt and John will start running toward her. Naturally, he runs much faster than she can and it is not a challenge to maneuver him so he is in grasping distance. 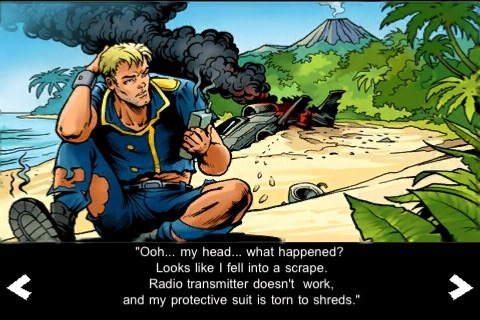 After he has kissed a girl she disappears most likely because he has gotten what he wants and can now discard her. When you have succeeded helping John kiss all of the girls, you are shown a score page with John Starley on it, wearing a lei and giving you a thumbs up. In the second level a wild mutant ape grabs John and kisses him while he screams out, “Screw me in the head! That ape is a girl!”

I tend to second-guess myself whenever I have a particularly bad reaction to something, but Kissisland is just wrong. The only way I would recommend this app is if I didn’t like the person I was talking to and I wanted the person to waste 2 dollars. If you want a good laugh, give it a try.