Empire Online is an MMORPG crammed into your idevice to fulfill your need for grinding and leveling. Released by Lakoo, Empire Online is available on the iPhone, iPod touch, and iPad for absolutely free. There is a downloadable coin system that ranges from $0.99 to $49.99. This game is also available in a Chinese version.

Empire Online has heavy inspiration from games like Ragnarok Online, Chrono Trigger, and Final Fantasy. You get very well designed graphics with lots of smaller details in the light of Chrono Trigger with colorful environments and big headed characters. You have a stat and class system very similar to Ragnarok Online, but have some noticeable differences like skills available and ‘race’ options. 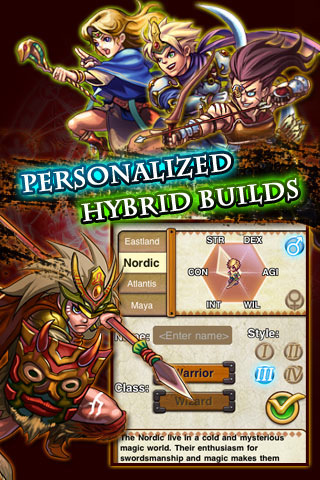 Play as 4 different character races, each with their own classes. Classes include: Eastland- Warrior and Kungfu Fighter, Nordic-Warrior and Wizard, Atlantis-Hunter, and Maya-Shaman. Party system with a head leader in full control and up to 5 players can team together to fight large mobs of monsters. There is also a PVP system that supports up to 5 vs 5.

The player base is mature and civil. I have rarely run into 7 year olds who think they are funny when they call others n00bs for asking how the basic game works. The game does have an extensive amount of information on the website (lakoo.com/en/empire). It would have been far better to include that information through some questing narrative or in-story tutorial. 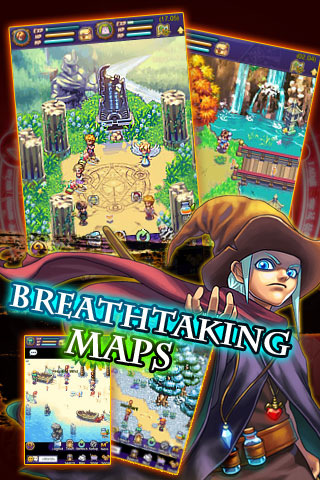 Unfortunately, the rest of the game has no real sense of direction or instruction. You spend a good majority of your money focused on repairing equipment instead of upgrading gear. Leveling is incredibly slow and the real fun never feels like it starts. You’ll probably notice that a lot of people are concentrating on the chat room. Thank goodness I was still playing this app when the latest patch came out that could toggle off the Global chat. When enabled this blocks your battle screens and literally hides your enemies from sight, which is really annoying. I just close the chats and play the game solo.

Battle scenes feel like an early Final Fantasy game with all the characters standing in a line, taking turns attacking each other. Until you start questing with others, you will be greatly outnumbered and the difficulty grows but most of the time you’ll just breeze right through. The game labels it’s map with level-based difficulty levels, which is incredibly nice since no other game does this. In exchange, the map doesn’t show you what is in your current town or where NPC characters are.

Overall, Empire Online is decent but still unbelievably forgettable. For a majority of the beginning 20 levels or so, it lacks motivation, incentive, story, or likable characters. I literally feel like Empire Online is a big chat room with RPG elements.