Bug like aliens have come to invade planet Earth and it is you job to protect the helpless humans. Bugs Wars is one of those protect the helpless human and blow up everything else type shooters. Released by Chillingo, made by indie game developer HotDog Studios. Bug Wars is a universal app, so you get an iPad version in addition to the iPhone/iPod touch app with one purchase.

In Bug Wars you are given a mission to protect various weapons with different abilities. You are able to unlock newer and better weapons as you progress through the game. Cost of the currency is rewarded when completing the mission through the protected civilian’s pocket. There are tons of weapons and you are allowed to equip four at a time. Also, don’t forget to restock on ammunition after each stage. 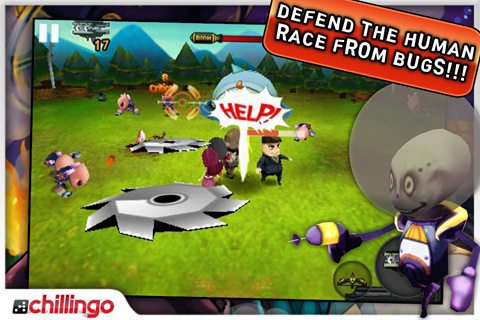 As more aliens are introduced, older weapons become less useful so you have to constantly buy newer ones. For example, you are given the default plasma gun which has infinite ammo but is the weakest weapon. This weapon is good against weak enemies but when faced with mechanical aliens, you must use weapons like bow and arrows. Bow and arrows are strong against machine type enemies but weak against biological ones. 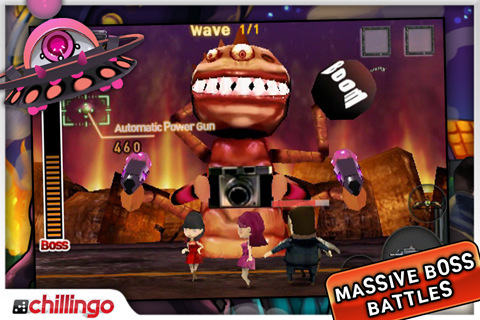 The controls in Bug Wars are very smooth and easy to learn. To the left you control your crosshair and to the right you can tap to shoot, or tap to switch weapons. It takes awhile to get used to the sensitivity but after practice, it will feel very rewarding.

Overall Bug Wars is an awesome game, given the $1.99 price tag, the fun gameplay, sharp graphics, and huge replay value. Let’s just say, that after my friend played Bug Wars, he started regretting owning an android phone because he couldn’t find this app. I would recommend this app to all fans of arcade style shooters. With so many stages, get ready to be playing this game for hours. And when I say hours, I don’t mean tedious hours. At no time did Bugs Wars feel like a rinse and repeat. Still not sure about this app? Then go check out the lite version in the App Store for free.