Pattern recognition is one of quirky little things that our brains do innately, and it’s also the primary concept of Look Again, a new universal app for the iPad, iPhone, and iPod Touch. Similar to games like the popular Brain Age for the Nintendo DS, Look Again sets out to “train your brain” and help keep your mind fit as a fiddle by giving you quickfire pattern identification challenges. The science behind all of this is a little fuzzy, but the game itself strives to be simple, stylish, and fun.

Gameplay is simple enough that pretty much anyone can play. Each level presents you with an arrangement of images: one big one surrounded by smaller ones along the outside. The larger image is made up of some of the smaller images, and your goal is to correctly identify which smaller images were used as quickly as you can. 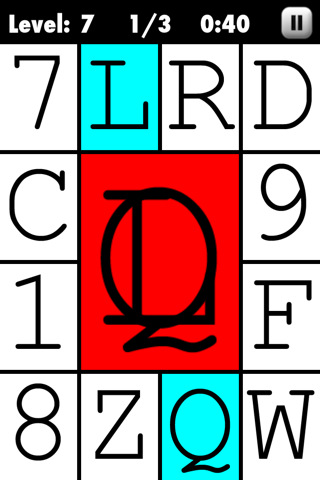 Starting levels are very simple, only using two simple images, but as you progress, the images become more complex, more of them start to be used, and extra hurdles, like moving or hidden pictures, start to come into play. Each level consists of three rounds, and there is no penalty for incorrect guesses, but there is a time limit, so you really have to be quick.

Each level draws on a large, but limited pool of images, so you start to recognize the same shapes as they continue to appear. Many of these are simply abstract figures, but animal pictures, card suits, and even letters and numbers make an appearance. 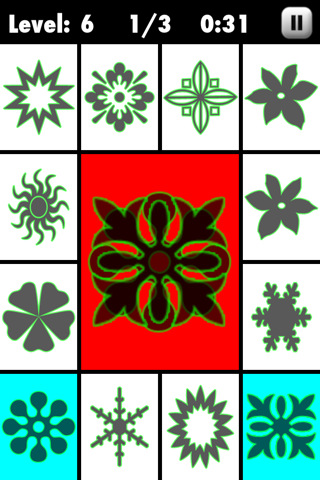 Given the nature of the game, I understood why the pictures were all fairly simple, but I was a little disappointed by the overall aesthetic blandness it lent the game. The menus were similarly clean and spare, which made for easy navigation, but the general look of the game is dull, and I absolutely HATED their soundtrack.

Ideally, you would keep playing every day, training your mind to recognize patterns quickly and more efficiently, but the game was a little too repetitive for my taste. Although there are 200 levels to play through, and the mental challenge is significant enough that I didn’t get anywhere near through all of them, the goal is always the same, and it makes the game feel too much like rote busywork after awhile.

Bottom line: it’s a very simple but fast paced game, appropriate for all ages and does pretty much exactly what it says, but I wasn’t terribly impressed, and even though it is a shiny universal app, for $1.99, I was expecting more.