This game has nothing to do with Vincent Van Gogh or Don McLean, although I have a sneaking suspicion that it is a derivative work nonetheless. See, I first played almost this exact game last year, under the title Starlight. Starlight and Starlight 2 were created by indie game designer Konstantin Stankevych. Both are available for free on the web, but I don’t think they have anything to do with Starry Night, despite the same look and concept.

Why bring this up? Well, partly because I believe in giving credit where credit is due, especially in the case of indie game design, and partly because Starry Night is a pale imitation of the original. When I first played Starlight, I was struck by the original concept, professional interface, and delightful graphics and music, while Starry Night felt like a generic disappointment. 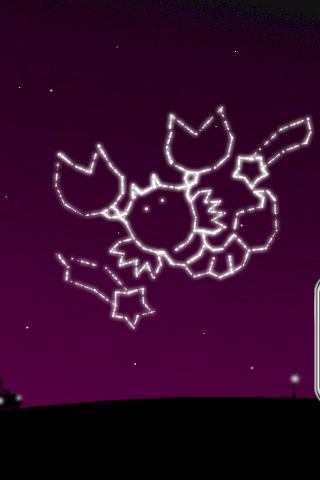 The game is based on a very simple, but elegant concept. You rotate a 3-D field of stars until they line up in such a way as to create a picture. It’s not a hard mechanism to master, and it’s very well suited to the iPhone’s touch interface, but presentation is key here, and that’s where things start to fall apart.

Now, one of my complaints about Starlight was their use of images that didn’t fit the beautiful and timeless setting of the game. It just felt odd to have things like cellphones suddenly emblazoned across the night sky, but at least the pictures were detailed and recognizable. Starry Night has the same issue of using weird images, except theirs are much more basic and ugly. Their treatment of the star field is arguably better, but the actual pictures generally look like cartoons drawn with a mouse in Microsoft Paint. They’re not at all in line with the elegant concept, and it’s often hard to identify images even after you’ve completed the level.

For the most part, the levels are very easy, although getting the image to “lock” can get a little fussy, thanks to somewhat imprecise controls. I would have liked more images and different difficulty levels, since the game is over much too quickly, and there’s almost no replay value. The game is OpenFeint enabled, although for what purpose, I have no idea, since there are no high scores, and there is no way to unlock the only achievement, as far as I can tell.

The music is a well-known classical piece, so it’s pleasant enough when it’s working, but the sound has the irritating tendency of cutting out with no warning on occasion.

I can only hope that Stankevych is feverishly working on his own port of the Starlight games to put these impostors to shame, but if it turns out that Stankevych was involved with Starry Night, I think I’ll be doubly disappointed, because despite the general charm of the game, Starry Night just seems sloppy, amateurish, and a far cry from the delightful Starlight originals.