Evil Angry Planet is a fairly fun Tower Defense game app. You have access to several towers to defend your base. Enemies will swarm in from the top of the screen and tower choice and placement and is vitally important. You have access to 5 shooting turrets, 2 support towers, and 3 explosive mines. Each turret and tower has upgrades that really open up the options for your defense strategies. The enemies come in 6 different forms and different sizes that your weapons may or may not be effective against. You also have 5 different playing fields that give you a change of scenery every once in a while. 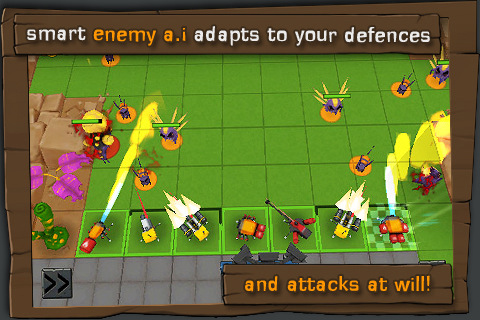 The 3D is quite good on the iPhone 3GS. Explosions, splats, and laser beams are colorful and vibrant, the enemies are purple and nasty, and the turrets look pretty good. It can be difficult to remember which turret is which however since there is actually very little text during gameplay. Because the game is in real time, you’ll have to memorize the little icons so that you don’t spend gold on the wrong turret and end up messing up your strategies.

After a few dozen playthroughs, I managed a top score of 23538 at 45 minutes of a single level. This is a tough game. Enemies swarm extremely quickly, turrets can receive damage, and bosses kill your towers in one hit (two hits if you upgrade to maximum). I did notice that the flamethrower and the maximum upgraded machine gun turrets are the best units in the game. I make 2 of each first, then start making those enhancement support towers to boost them. I spend the entire beginning (when the enemies are at their weakest) to level up the turrets slowly. I found this gave me the longest survival rate. 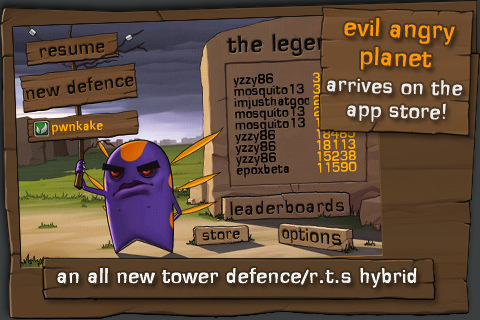 As a fan of Tower Defense games, this one is a gem for being both 3D and a high-intensity real time strategy game. There are some noticeable slowdowns when the enemies come in 20’s and all your turrets are firing away. It also crashed once when I submitted my score to OpenFeint. Wasn’t a big deal to me, but I’m sure it would be to high score competitors.

Overall, I really enjoyed Evil Angry Planet. The art is great for what it is, the environments are fun, the gameplay is challenging, and the overall gameplay is really great. A whole lot of fun.