Sentinel 3: Homeworld by Origin8 is an iPad, iPod Touch and iPhone app that closely follows their tower defense game tradition. I reviewed this game on my iPhone 4. Homeworld is the third rendition of the Sentinel series which expands upon Sentinel 2 Earth Defense and Sentinel 1 Mars Defense previously released by Origin8.

Graphics
The graphics in Sentinel 3 Homeworld are simply amazing. The towers, the enemies and the background terrain all looks amazing. You can see that a lot of care and time was put into making this app look great, which is refreshing considering most tower defense apps have pretty basic 2D graphics. It can be a little difficult telling the background from the foreground sometimes, but this generally won’t get in your way. 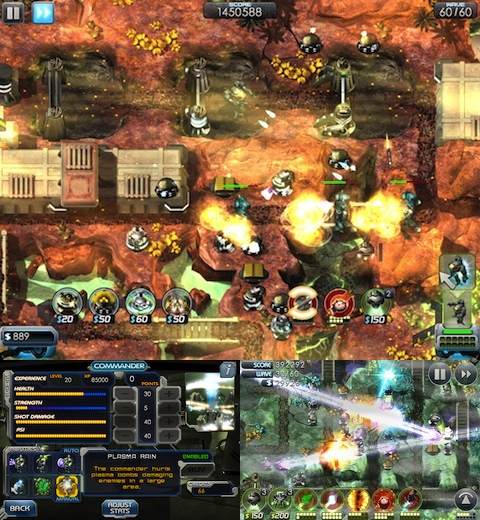 Audio
You have gone to the alien’s homeworld to blow them up, and there is no other music more fitting than what you find here. The sound for Homeworld is just like the graphics. It’s beautiful and militant, even a little retro, working perfectly with the game’s theme. In many ways it’s similar to the music found in R-Type and other older games, but you are sure to like it.

Controls
Sentinel 3’s controls are similar to any other tower defense app. You first select the tower you want to use, then you select somewhere else on the screen to position that tower. There are certain spots that towers cannot go on, so you are given minimal space to defeat the aliens.

After placing a tower, you can tap a tower and then use your money to upgrade it. This will be useful later on, as it gives each tower more strength and a better reach.

Unlike other tower games, you also get a commander unit robot that you can equip with certain effects. Not only that, but the commander gains experience after each round, making it stronger as the app progresses. Aside from selecting and using the commander’s skills, it will attack enemies automatically so you do not have to control it.

You can also upgrade and add towers when the aliens are attempting to destroy your base, which can help you even out rounds when new enemies come up. 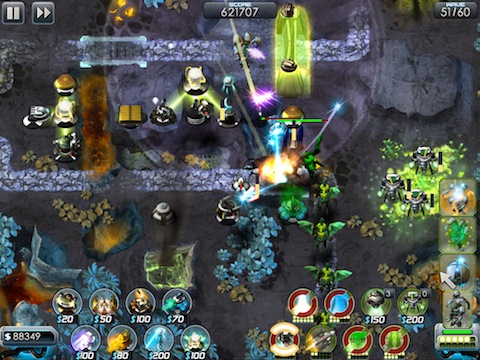 Issues
I had two major problems with this game. First, when it comes to tower defense apps, Homeworld doesn’t offer too many things new to this vein. True, the commander unit is different, but it functions as a moveable tower with more effects.

The second issue is that you have to pay money for an upgrade to get extra levels. After beating the first campaign, there is a second one to go on to. However, you have to pay for this ($1.99), and I just don’t like that you can’t play the full app without dishing out more money.

Overall
Despite a lack of new content, Sentinel 3: Homeworld is a challenging app, especially if you like tower defense games. The controls and graphics are great, sure to delight even those new to this genre.

Here is a video demo of the Sentinel 3: Homeworld app on the iPhone