Hero Defense Pro for the iPhone & iPod touch is a very fast pace defend your tower game where you are given a hero to use instead of building towers, hence the name “Hero Defense.” With hordes of enemies stampeding at you, you are going to need some ice on the side for that finger.

Your main control is to just tap around the screen telling your hero where to move. You are also given a shop menu where you are able to heal yourself, repair your tower, and upgrade your stats. Your Hero is also given three skills that are upgradable every other level. Don’t worry about focus attacking because your hero is set to auto attack. This may not sound like the brightest idea, but with the amount of enemies you have to fight, you’ll soon understand why the auto attack function is a good idea. 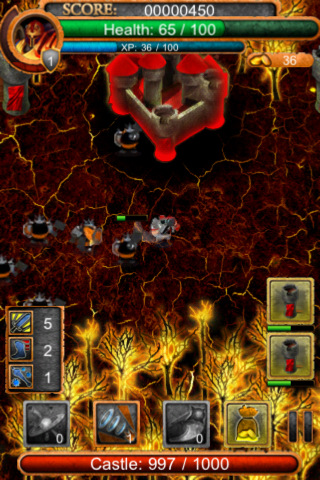 Visually speaking, this game isn’t that bad. It uses a fairy good iPhone game engine so the graphics aren’t too bad. The colors are bright and there are no dead pixels so that’s always a positive. The hero skill visuals are a little vague and can use a little working on. You are also given two heroes to use. The warrior and the mage type classes. Hopefully if this game gets patched or upgraded in the future so they can add more.

There aren’t much features implemented in game that allow you to really use the iPod touch and iPhone’s functionality. Only thing is a hero buff that pops up that requires you to shake your iDevice to activate. There is also the occasional zoom in. Probably trying to somehow add in a tilt function would give Hero Defense a little more character. Not having all these little functions make this app feel plain. 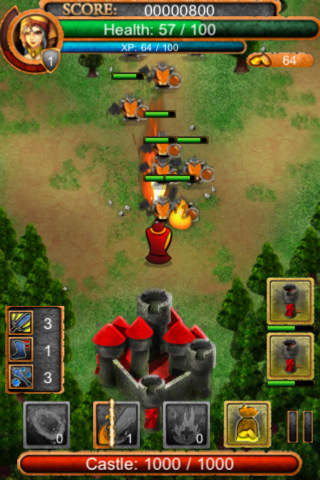 Some other improvements they could have done, or could patch in the future are scaling the gold amount and adding in or changing some things in the shop. First off let’s talk about the gold scaling. I’m not going to go in depth about how much you earn and how much it costs to buy this and that, but the amount needs to be either lowered or the player needs to be able to gain more money. Towards mid game of each level your hero will be taking a lot of damage from multiple enemies at once. I often found myself in the shop just purchasing health to keep myself alive while fighting a boss or finishing the stage. The game became more of a, save up for health, instead of upgrading a hero.

You are only able to upgrade three things. Attack damage, magic, and movement speed. And since I mostly found myself standing in one spot (in front of the castle) I never upgraded speed. Probably replacing the movement speed upgrade with a max health upgrade will not only solve the gold scaling but the health spam to win issue.

The Hero Defense Pro app can be found in the iTunes app store for $1.99. If you want to try it out first, download the free version of the game called Hero Defense Redux to experience its gameplay. While not the best iOS defense game out there, the game certainly is not the worst. Hero Defense Pro feels like it is worth its price tag. If CollegeKidApp made a sequel game with the same concept, I would definitely play it because I really think their “hero type defense” is a great idea.