Like old school Hangman, one person creates a word for their opponent to guess. Unlike old school Hangman, in Hanging With Friends you have to create your words from a random group of 12 letters, just like picking from a row of Scrabble tiles. Each player is represented by an avatar which is suspended in the air by five balloons. Every time you fail to guess your opponent’s word, a balloon pops. Lose all five balloons and your avatar goes skydiving. The avatars and the cartoonish scenes they float in front of are childish but understandable as Zynga couldn’t really have you hang from the gallows when you lose. 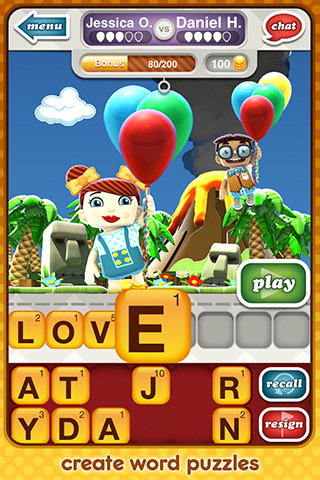 The only disappointing part about the game is the coin system, which is a blessing and a curse. When you’re trying to guess your opponent’s word, there are three lifelines you can use to help you. Each of these lifelines costs 20 coins. You earn coins by scoring points with the words you create. Like Scrabble, each letter you use has a point value, and every turn you create a word a multiplier is placed randomly in one of the 8 spaces you have available. It’s a clever idea, and it creates a new layer of strategy in word creation. For example, you might try for a low scoring word that’s difficult to guess, a high scoring word that’s easy to guess, or a mixture of both. The problem is that you only get 20 coins for every 200 points you score, which can take many turns. If it was easier to gain coins the dynamic between creating a high scoring word or a complicated word would be much more exciting.

Even with the imbalanced coin system and lifeline system, the game works. Games can get increasingly intense as you go back and forth with an evenly-matched opponent. As the duel wears on, you’ll have less guesses and less margin for error, but because of the creativity involved it never stops being fun. 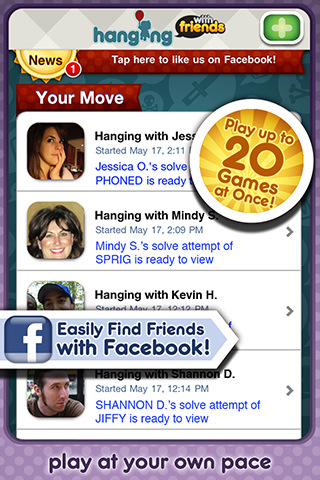 There are still some minor bugs to be worked out and the coin system needs fixing, but Hanging With Friends Free is a fresh twist on a classic game. If you’re a fan of word games, this is a no-brainer iPhone app to download.

Note: The free version of the game is not the only one available, so if you want an ad-free version to buy you can purchase Hanging With Friends (iTunes $1.99).

2 Comments to “Hanging With Friends Free”