I get a kick out of straightforward game titles. If I were a game developer, my releases would have names like “Shoot Things” and “Find a Bucket.” So I was pretty pleased to find a cute 99-cent iPhone app titled Feed-the-Duck. Sure, I’ll feed the duck! With its avian protagonist and slingshot-physics gameplay, it’s reminiscent of the ever-popular Angry Birds. It’s not a blatant clone, though; the game is different enough to stand on its own.

The object of the game is probably obvious from the title, right? You control a duck, who dives for tasty fish while avoiding deadly electrified anglerfish. The duck rests on the surface of the water; to move him, you fling him into the air, and as he comes down he dives. The jump-and-dive motion adds a bit of challenge that wouldn’t be present in a typical slingshotter, and it can take a while to get used to the game’s physics. The first few levels are just you and the fish, but as the levels get more difficult additional obstacles appear. Soon enough, you’re knocking tires onto catapults, and turning water jets on and off with timed switches. 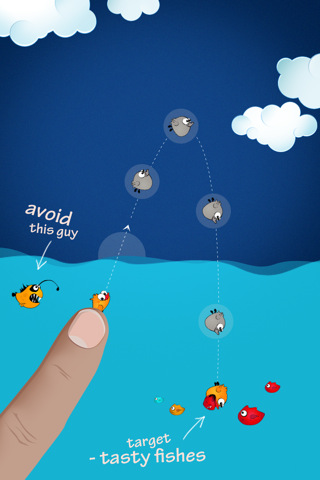 The graphics in Feed-The-Duck are simple and cartoony, but well done. The duck, in particular, is an endearing fellow, and his animated facial expressions add a nice touch. The level design and variety of obstacles is good, especially when you get past the first few levels. 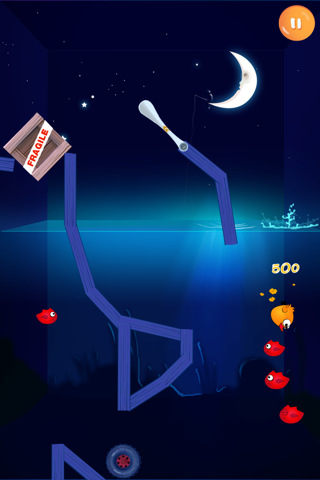 The gameplay presents a few annoyances on the iPhone, however. The duck cannot move across the water’s surface; if you need to be in a certain position, you’re stuck flinging him until you get him in the right place, losing points along the way. It also appears that the enemy fish’s collision mask is a little too big; a few times, I got zapped when I came close to one, without actually touching the fish. This can easily lead the player to miscalculate distances.

Feed-the-Duck is pleasant and challenging, but not without its flaws. It’s not ready to steal Angry Birds’ spotlight yet, but it’s still a good way to spend a bus ride or a wait in line. I hope to see an updated version with improved gameplay; it could have potential.