Julius Styles is a new universal app for iPad and iPhone from Lapland Studio. Put yourself in the shoes of an economic hitman working for “an elite, secret circle at the helm of the global economy” known as the Assembly. Julius is tasked with getting into various scenarios to influence things to the benefit of the Assembly. This is essentially an adventure game mixed in with a few puzzles along the way.

You will have to tackle in game puzzles, but also learn to combine items and use them in specific ways to get them to work to your advantage. Most of these items will have to be found first of course, and that isn’t always easy. You also get to make decisions on how you want Julius to respond to various situations, but except for a change in dialog you always end up in the same place.

To move around, you have to tap in the direction you would like to go, it is easy enough but given the large distances Julius needs to cover other options would make more sense. To pick up items you simply tap on them, and if you are having trouble finding them you can click on the odd symbol in the bottom right of the inventory. Items in the inventory can be combined by dragging one over another.

The graphics are okay, but that’s all, the developers also don’t make good use of the screen and often limit the field of view too much. The sounds are ok, but the voice of Wesley Snipes is clearly being put on by somebody else as the real Wesley continues with his time in jail. 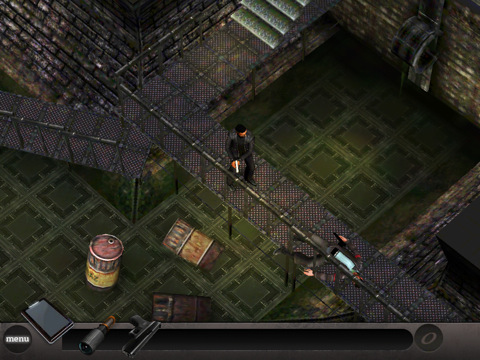 The idea is there, but the controls are not great, the story line is poor and the gameplay gets very boring and even frustrating as sometimes the items don’t react until after a couple of tries from an exact position.

The game promised much, but definitely under delivers, which would probably explain the $3 drop in price shortly after release. Perhaps developers are over pricing some games in the hopes that buyers will think that more expensive means a better product.

This one is definitely not much fun as yet, let’s see what the updates bring. Oh, and I would hate to have to play it on the smaller screen of an iPhone.