Would you rather run and jump across a canyon, or ride a rocket powered angry T-rex to your goal? If you anwsered the latter, Scribblenauts may be the application for you. Scribblenauts Remix is an adventure/puzzle game by 5th Cell Media and Iron Galaxy Studios, and published by Warner Brothers Entertainment. Previously seen only on the Nintendo DS, Scribblenauts has now made the jump to the App Store as an iPod touch, iPad, and iPhone app.

The main goal of Scribblenauts is to collect starites. These are typically positioned in far away or hard to reach parts of a level.You must then type in a words to create whatever you typed in in the world. You can then use or combine these items to help you reach the starite. This has always been the basis for the Scribblenauts series, and it still feels as fresh and interesting as ever. Starite is up high on a cliff? Why use a ladder when you could grab a balloon, fly a space shuttle, or take the aforementioned flying dinosaur? Each level is a relatively small area with a few obstacles that you must think creatively to overcome and then grab the objective. There is a wide variety of dangers and things to get in your way. 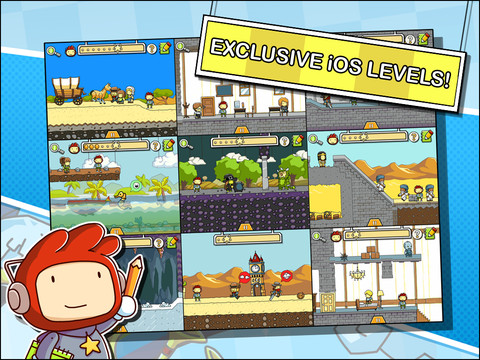 The levels design is on the smaller side and usually doesn’t have a lot going on, but is greatly aided by the art. Scribblenauts has a great, crisp, hand-drawn style that really lends itself to this type of adventure. It also takes advantage of the power of modern Apple devices to look decidedly better than it did on the DS.

Also aiding the level design is the sheer number of things you can type in and create. There must be millions of ways to solve each level, although some of them are undoubtedly very similar in execution. But nearly anything you can think of, you can type in and have it poof into existence, ready to aid you (or attack you). You can summon zombies, tanks, kittens, jetpacks, God, and the kitchen sink. The only categories that are excluded are dirty/offensive words, and celebrities/products. You can also combine/ride/activate things to make some pretty hilarious objects. This is one of the few games where you actually are more limited by your imagination than by the design itself.

The audio is what you would expect, cute noises, and a light, dreamy soundtrack. They fit very well and do their job. 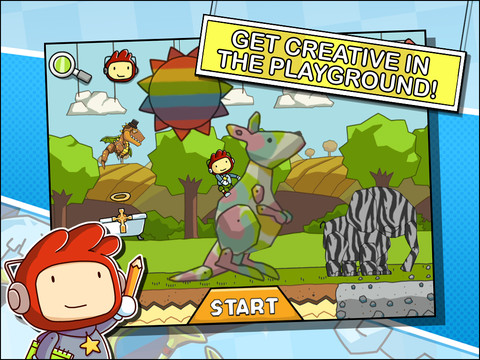 The controls work well, probably because the previous releases were also touch-screen based, so the developer has the experience, and didn’t need to completely change the control scheme.

Now the app is priced at $4.99. This is at the upper end of the cheap apps. However, this game has more levels and features overall than the DS games, which started out at $30. The only caveat is that a lot of the levels are taken from the DS games, so if you have played those to death you may already know how to solve a lot of these. That said, there are some new levels and features that you will enjoy so it still has a lot of value at $5. If you have not played the previous games, then you are in for a treat.