Pulse : Volume One is an iPad app that mends music with multitouch gameplay. I’m a pretentious hipster. I have arguments with friends over which Radiohead album is their best. Pulsing, wordless, immersive, adroitly mixed electronic music is something I get into. Also, I liked Guitar Hero. Pulse: Volume One is perfect for me.

On first glance, this iOS game from CypherPrime looks like a pretentious, minimalist, indie tap-tap-tap-on-the-beat ripoff experience. You know, Guitar Hero, Dance Dance Revolution, Rock Band… the ones that suckered you into purchasing $200 controllers that look like Fischer Price Stratocasters. The ones you sold on Ebay in a panic when your wife told you she was pregnant. The ones you blame for that Def Leppard purchase on iTunes. 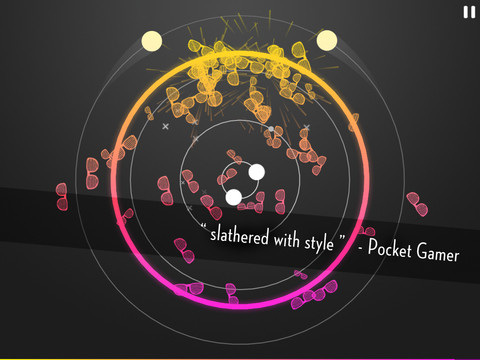 Fortunately, Pulse doesn’t depend on licensed rock music. All the tap-tap tunes on this iPad app are original, indie electronic beats—and they sound like Radiohead. This game makes me salivate.

You don’t need an unkempt beard and an indie electronica music collection to enjoy this iPad experience, however. The interface of this application is simple to the point of being childlike. As mentioned above, the menu design is minimal on this app—aesthetically, it reminded me of Superbrothers, with simple icons instead of written instructions.

I played the iPad version of Pulse, and the app is unfortunately not available for the iPhone or iPod Touch. 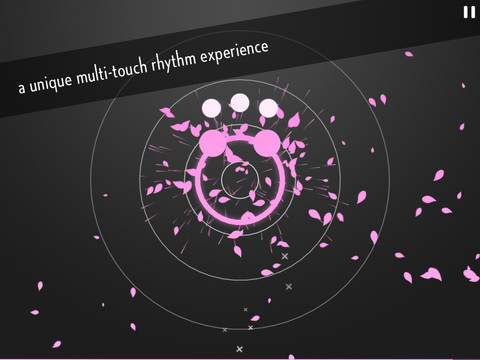 Here’s how to play: you select a song, just like you would in Guitar Hero. You’re then taken to the gameplay screen, which is a series of circles, kind of like a target. The graphics aren’t much to speak of (they aren’t bad—there just aren’t a lot of them). The music starts, and the beats emit from the center—they’re expanding circles, like on a submarine’s SONAR screen. Little dots appear on the target circles. Your goal is to tap the dots when the “beat circle” hits them. It’s that simple, and very reminiscent of Rock Band or Guitar Hero.

Initially, I was convinced this Pulse wouldn’t keep me interested very long. I “got it” rather quickly, learned the ridiculously simple controls, and tapped away.
Ten minutes later… well, that was the last time I checked the clock. Pulse: Volume One doesn’t have the complexity of Guitar Hero, but for some reason it’s giving Angry Birds a run for its money.

The music is phenomenal, atmospheric, extremely well-produced, and fun. The developers knew this app would live or die on the quality of the music, and the soundtrack (available as a separate purchase) doesn’t disappoint.

Pulse: Volume One is an iPad app to cherish—and to keep on hand if the kids are bored in the back seat. It’s so fun that the Angry Birds guys must be jealous. It’s so minimal that Steve Jobs would be proud. It’s so indie that I’m considering growing that beard again. You’re bound to have tons of fun with this stellar application. I can’t wait for Pulse: Volume Two.

Here is a video demo of the Pulse : Volume One app on the iPhone