Stop the Knights by Red Knight Studios is an app for the iPhone and iPod Touch. Stop the Knights! puts you in the role of the infamous Dracula. With an army of minions at your disposal, you will protect your castle from the forces of good. From skeletons to Cyclopes, you’ll choose the monster that’ll suit the situation. Protecting crystals and managing mana are extremely important in beating a level.

You do not get to control Dracula directly. He shows up in most of the fifteen levels (castles). Dracula is immortal but knights can run past him and the minions. When this happens, send a new minion and hopefully it will distract or kill the knight. New minions will be available according to the level but on later levels, all of them can be used. Minions will die when they take too much damage. 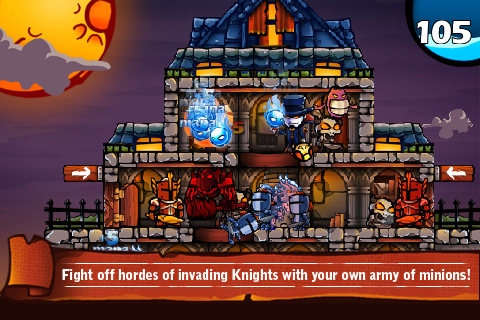 The most important things to do in this game are saving up enough mana, knowing when to use it, and what to use it on. Spirit bomb is an important minion since it can generate five mana and explodes when an enemy gets close to it. After awhile, spirit bombs will not generate any more mana. You can tell because spirit bombs will not have a flame when this happens. So make new spirit bombs when you can. Max mana is five hundred. The only things the player has to do are selecting and dragging a minion, protecting crystals, and strategizing. You lose when a crystal breaks. Be careful of archers since they can sometimes bypass the height of a minion and damage your crystals. The game warns you when and where enemies will appear with an exclamation mark. It will also tell you when it is the final wave. This is a simple defense game but can catch you off guard if you don’t pay attention. 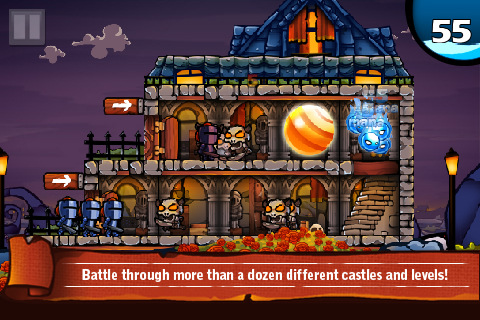 The graphics of Stop the Knights are colorful and sharp. It reminds me of old 2D games with a bit more attention to detail and some pixelation. The background can get stale since it gets reused but it is nicely done. The minions, Dracula, and other things are not frightening but some of the minions might not look the way we expect them to look. When something takes damage, it will be flashing dark red and a number will appear onscreen and will disappear soon after. You can see crystals crack and soon after it will break if they take any more damage. Overall, the graphics can be repetitive and pixelated but are simple and colorful.

The title screen music should be familiar to most of us. I usually hear this from an old Dracula or other vampire movie. The in-game music is well done and it suits the game but repeats from level to level. The sound effects depend on the unit since knights and some minions who use melee sound the same but is completely different from ranged attacks. There is no iPod music support. The audio is mediocre since it gets repetitive but it fits the game.

Stop the Knights is sold at the discounted price of $0.99 on iTunes. I don’t know how long the discount will last. There is Game Center support with achievements and leaderboards. You can replay a level to try to get a flawless victory which is beating a stage without having a crystal take damage. I recommend this app for someone who hasn’t played a defense game before. This app can be repetitive and boring after awhile but it is simple and colorful.