Super Bit Dash is a retro action game by FakePup for the iPhone, iPod Touch, and the iPad. You swipe to dash which breaks green barriers and helps you get coins and avoid obstacles. This app is about reaching the end of the course while collecting coins and dodging dangerous traps. There is a classic mode which features easy and hard courses and endless which has a mix of both but you have only one life. The tutorial helps teach the basics of the game.

The game moves your character automatically but you have some control over him. By swiping upward, downward or forward, he will dash a short distance in that direction. You cannot make him go in a diagonal and swiping backwards will make him slow down. Tapping the screen will make the character jump. Slowing down and jumping does not cost energy but dashing will. Use these moves to avoid spikes and lasers and collect coins. 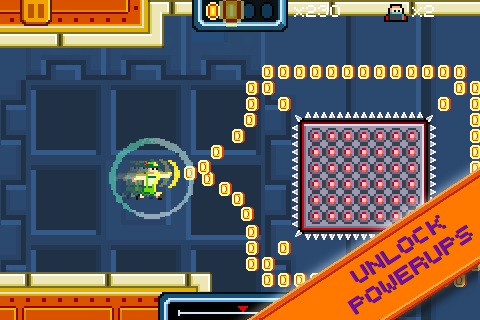 Coins are energy and without energy your character will die. Every one hundred coins you get will give you an extra life. When you die you’ll continue from a checkpoint. Coins can be used to buy many things like different runners such as Santa or more lives. Tap select to change it to selected to use your new or old runner. You can also buy two extra coin slots and a magnet power-up which picks up coins when you are right next to them (useful for walls that have coins in them).

Super Bit Dash randomly generates a course for you to complete so you usually get a different course than the last. The courses can be challenging if you don’t look ahead and if you waste your dashes. Try not to be greedy with coins since it might lead to easy deaths. When you finish the course, the result screen will tell you the number of checks (checkpoints), how long it took to beat it, the number of coins you’ve collected, the number of deaths, and your score. 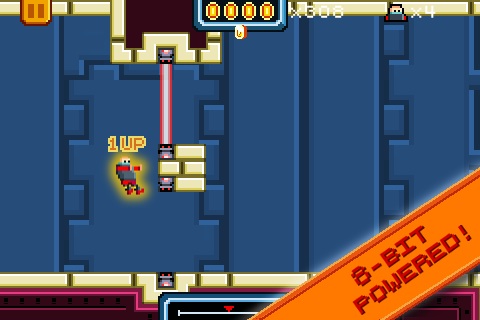 The graphics in Super Bit Dash remind me of retro games in Super Nintendo. They are polished and cohesive. There is pixelation but I think that is done on purpose like Santa’s bag. The images remind me of various games. The stage layout resembles Megaman games and the coins are similar to the ones in Super Mario. Your hero runner looks like the baby from Captain Commando. Speaking of the hero, he is the only runner I have that has an aura that tells you how much energy you have left. Every now and then there is some lag but it didn’t bother me. I think the graphics are well done and reminds me of my gaming experiences from another generation.

The audio for this app is also very familiar. I can’t pinpoint what they remind of but it fits the game very well. There is a sound effect for dashing, jumping, and collecting coins. A voice says three, two, one, go when you start a course. I like the beats of the music while there is an odd ticking sometimes. You can turn the audio off if you don’t like it.

Super Bit Dash used to sell for $0.99 in the App Store but it is free at the moment. Coins can be bought with real money. You can pick up or start a new course if you want. This app has Openfeint and Game Center support with achievements and leaderboards. There is an update sooner or later since a coming soon is under the endless mode. The recent update added a better replay value since you can use the coins you’ve collected to buy new runners and power-ups. I like this game since it can be challenging at times. I can see people getting annoyed by the difficulty and sometimes the “random” course generator isn’t so random. I highly suggest giving this game a shot especially those who like the retro feel.