Cosmic Cab from Sybo Games is a racing puzzle-type iPod touch & iPhone game available for free in the App Store. The overall goal of the game is to race down the gravity-bending road, through twists and turns as you pick up aliens and avoid falling to your death.

At first I thought that this app was really pretty cool. It had an awesome vibe to it and seemed to be pretty original in structure and in concept. However, the app kind of loses its charm after the second round, as it’s pretty much the same thing over and over again. There are new situations that arise that you’ll have to figure your way around, but very rarely is there a new solution to an old problem. The magic fix-it will always be “turn your iPhone that way.” Besides that, the only other solution to your problem would be to press the screen, so that you can jump. Which isn’t exactly groundbreaking or exciting. 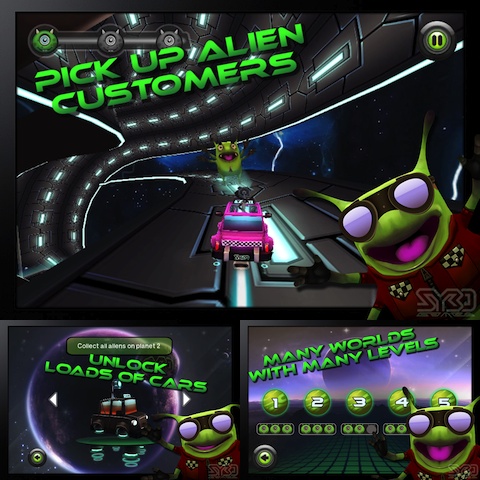 The levels themselves are rather short, taking just a minute or so to complete if you don’t fall off the edge very often. And keeping away from the edge isn’t exactly difficult, which sort of takes the challenge out of the game at times.

The graphics are fine, though I do normally expect a little bit better from games that market themselves with futuristic concepts. It’s sort of just a given that if you’re going for a more space-aged concept, you should have a more space-aged look. And while the graphics aren’t bad, they didn’t quite live up to my expectations.

I definitely was not impressed with the controls in the application and felt that, as a whole, they could’ve been a lot better. While they’re not awful, they’re also definitely way too sensitive. I found myself, at times, tilting the screen the tiniest millimeter and having my cab go rushing off to the left, as if I’d turned the whole iPhone on its side. I think that they if they were to review that problem and fix it up a bit in an update, that would solve a major issue that I have with the app.

Overall, I wouldn’t really call this app anything too special. It may be nice if you want a very, very short app to play around with when you’re waiting for something to cook in the microwave, or during a few commercials. However, it doesn’t really carry much replay value or anything that would make me come back and want to get right back into it. I’d suggest adding better controls and perhaps a few upgrades/power-ups that you could buy along the way in order to spice up the experience for those that want something new.