The Hunger Games: Girl on Fire is a free iPhone and iPad platformer game based on the 2012 Lionsgate motion picture The Hunger Games, which is in turn based on the Suzanne Collins Novel. In this iOS app you’re playing as the main character in the movie, Katniss Everdeen who is running to escape the attack of killer Tracker Jackers through a forest.

The game is created by the same developer who brought you Canabalt for iPhone, and is in the same genre of survival games. You have 2 platforms (ground or tree tops) that you can jump to, and a bow-and-arrow that shoots down enemies. 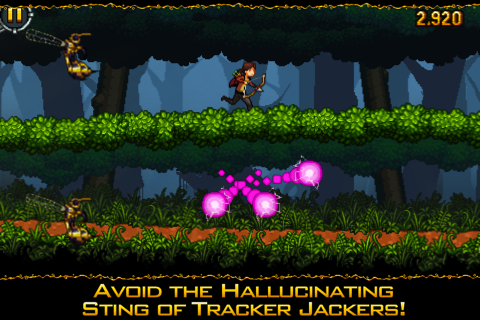 Girl on Fire is a simple game really, as most survival games on the iPhone are. Your options are Play, Ranking, and Extras. In Play mode you are shown a quick story about the game and are thrown into the action right afterwards. Tap the flying insects to shoot them down with an arrow. Swipe up or down to jump between the 2 platforms and avoid getting hit by fire bolts. The attacks start out simple enough but within a few rounds of attacks the difficulty level increases exponentially. You will have to be extremely good at timing your jumps to avoid getting captured. Once you do get captured, you have to option to “Deny Fate” and continue playing or “Give up” and go back to the main menu.

If you get past the forest stage and the swarm of Tracker Jacks, you will enter the second stage of the game called District 12. Here The Capitol’s hovercrafts is hunting you down and throwing bolts of laser at you. Winning the game requires a lot of perfectly timed moves and perhaps a bit of luck as well. 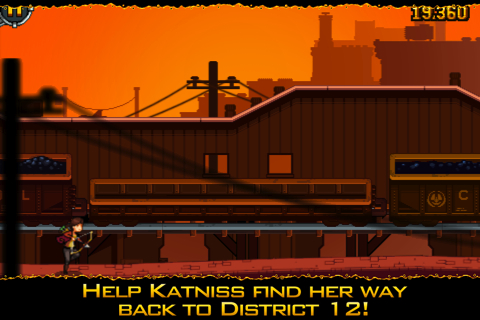 The graphics in Girl on Fire are colorful yet maintain a dark and edgy look. The 16-bit graphics fit the game well, although they don’t do Jennifer Lawrence’s character justice. The dynamic background music fills the space quite well and changes based on the screen you’re on, and based on how far you get into the game. They’ve done a good job of making you feel like you’re actually in danger as you play the game. High scores in the game as of right now are showing scores of up to 41,000 points which is insane.

Overall, a free game worth grabbing which works just as well on the iPad as it does on the iPod touch and iPhone. Great for a little challenge and easy enough for quick plays on your break time, or while waiting in line for the movie.

Here is a video demo of the Hunger Games: Girl on Fire app on the iPhone