I don’t know about you, but Google Maps is my best friend–I use it for everything, including a quick run to the corner store (I’m directionally challenged, okay?). Matteo Caldari has released a route editor/outdoor utility app called RoutePad, something similar in that it maps a route, but also keeps track of your progress on the road. Obviously, it is best to have GPS capabilities; barring that, plenty of wireless internet spots along your way.

After the app figures out your current location, there are two different ways to plot your route in RoutePad: through the Map tab or the Routes tab, both on the bottom toolbar. In Maps, you can pan across the map to find the relative area (much like Google Maps), and then tap the flag+ icon in the top toolbar to set down placemarkers. Be sure to set them down on a actual road, because the line that the app generates is automatically linear, instead of adhering to the streets. Tapping the Share button on the top right will allow you to save the route, after which it will show up in Routes.

Routes has the more traditional method of pulling information: inputting the start and end addresses. Just tap the Import button on the top left, and you can either manually input the addresses (which will prompt you to save the route automatically) or import a GPX or KML file from your computer (your device needs to be on the same wifi network for this option to work). After either going through Maps or Routes, all the route information can be viewed in the Dashboard tab (be sure to remember to change your units in Settings, so that you’ll see familiar letters: kilometers, miles, and knots are supported). As soon as you get started on your journey, hit Start in your Dashboard main menu and it should begin recording your movements. Check your elevations, ascent/descent calculations, speed, plus more; you can stop the stopwatch any time. 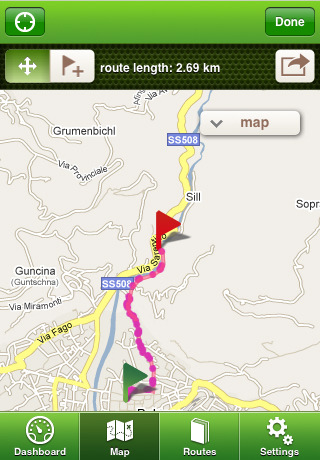 The sheer detail RoutePad spouts at you is amazing, but you do need internet access along the way if you want to keep track of all that data. Another big downside is the route-planning under Maps. Unless I’m planning to drive directly from point A to point B–through houses, yards, and fences–it is rather useless to me; as it is, I have to put a placemarker every centimeter to plan a proper route. The Route button manages to be this problem’s saving grace, but just barely. As it is, unless you have GPS or an obsessive need to know about every step of your trip, I wouldn’t spend the $2.99: just stick with Google Maps.