Stop motion animation has basically been around since the beginnings of film. If you’ve ever enjoyed The Nightmare Before Christmas, the AT-ATs from The Empire Strikes Back, or even Robot Chicken, you’ll know something about its unique visual appeal, and StopMotion Recorder brings the ability to create your own stop motion masterpieces on the cheap. It’s not an app for the impatient, but if you have a steady hand and can muster a little focus, this could quite possibly become your new favorite app.

StopMotion Recorder is effectively a photography app that makes it easy to string a succession of still frames together into a movie. You pose your characters, take a picture, pose them again, take another picture. Rinse and repeat until you’re done. In theory, you could do this with any photography app, but StopMotion Recorder sets it up so that it’s easy to keep track of where you’re at in the process by including a light overlay of the previous image, so you know exactly how much you’re moving between each shot, and it allows you easily view and edit frames as you go along. 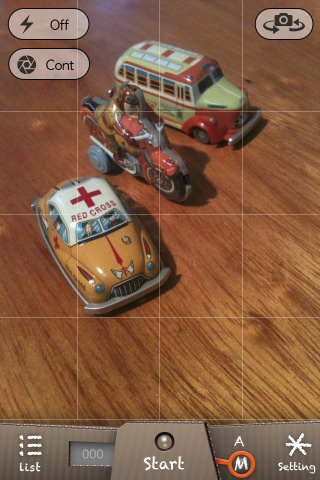 Naturally, the picture quality is going to be limited by the iPhone camera, so don’t come in expecting Hollywood-caliber results, but with a little effort in decent light, the finished movies don’t look half bad, and it’s a piece of cake to share them. You can upload them directly to Flickr, YouTube, and to Twitter a couple of different ways. The one thing I found kind of odd was that you also had to manually export the movie to your camera roll instead of it just saving automatically.

It’s a very decent little app, especially for the price, but it’s not super robust, and there aren’t a lot of settings to play around with. Although you can mess with the frame rate and utilize various toy camera filters to give your film a distinctive look, there aren’t a lot of frames to work with, meaning your movies are always going to be on the short side. The editing capability is also fairly limited, and there is no built-in sound editor. 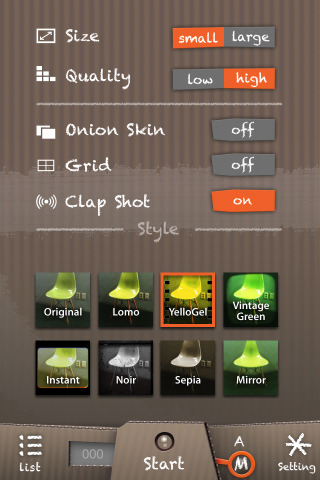 Still, for the price, StopMotion Recorder is quite an amazing deal. It works beautifully and delivers results that are about as professional as you could hope for with the iPhone’s less than perfect camera. It’s really the extremely user-friendly interface that makes this such a killer app, as it is super-easy to learn and use. Instead of hours of painstaking photography and detailed clay models, all you need is an iPhone, 99 cents, and you’re on your way to being the next Ray Harryhausen or Tim Burton.