Jamtrack is an interactive application for your iPhone, iPod Touch or iPad from Supersoftware in Japan that allows you to create music without any instruments present. The game is like a combination of a keyboard and the Apple program Garage Band, except that it is much easier to transport.

To begin making music you should probably decide on what kind of band you want to imitate. After choosing which instruments to incorporate in the song you’re creating, you lay down the track, as it were, by touching different boxes graphed on the screen. Depending on the box’s position on the grid, you create either a high or low pitched sound. When choosing the type of percussion you’d like in your song the position of the box determines which part of the drum set is used. After arranging the track, you can add more bars and instruments, remove some, or start all over again. 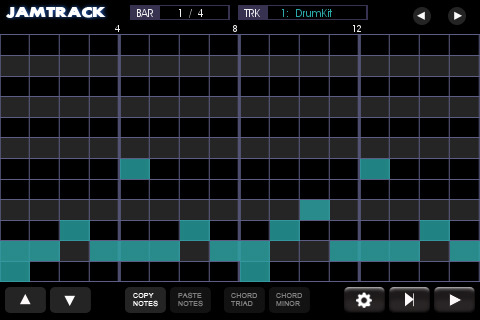 If you’re musically challenged, this game could be really fun for you. I have no idea how to play guitar or piano, but Jamtrack nearly had me fooled that I did. It takes a while to get the hang of the format, especially if you are not used to mixing or producing music, but the outcome is worth the effort. Without having to learn an instrument you can basically orchestrate an entire rock band just by touching your screen. One problem I had however, was taking sounds off the track. In order to reverse decisions with the placement and types of sound, you tap the box that signifies it and the sound disappears. Despite having relatively small fingers I had a really hard time being precise and tapping the right box. On an iPad I doubt this would be a problem, but for screens of smaller sizes it is hard to be exact.

Another problem I experienced was producing the right timing for the instruments. Each instrument you use is arranged on separate screens that overlap once you play the song, so that they play all together. My mind is not wired to understand musical notes or gadgets in the first place, so trying to coordinate all of the different sounds on Jamtrack was pretty difficult. The piano would come in too soon or the drums would overwhelm the guitar so often it was just a big old mess. While my songs never turned out quite right, the game is user-friendly, and anyone with a background in music will probably fall in love with this application. It’s on the pricier side, at $2.99, but for the complexity and sophistication it offers, I think it is well worth the price.