The portability and power of the iPhone makes it an ideal device for making music on the go – either rough ideas, fragments of songs or whole compositions. As someone who made a start eeking out drum and bass loops on a dusty Atari 1040 ST and Cubase, the ability to crank out an entire song on my cell phone remains mindblowing. The peripherals at my disposal are also eye-opening – the Akai SynthStation 49 being a noticeable entry into the iPhone/Music making world. Even better – the newest iOS will pack full MIDI support – so you can bring your iPhone or iPad into your traditional MIDI setup and they will play nice. That’s seriously impressive. 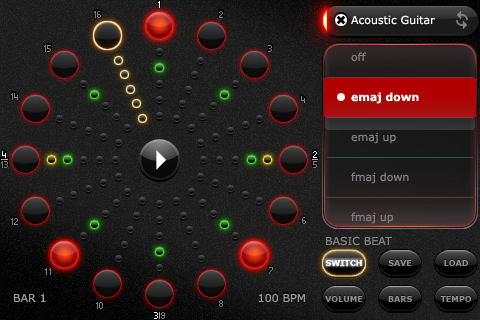 So where does the O-Generator music app fit into this brave new world that hath such iOS apps in it? Well curiously it doesn’t. For someone who gets new and exciting apps flying into his inbox daily, O-Music generator left me a little underwhelmed.

It’s not for want of trying however. A new and innovative approach to music making on the go, O-Music generator uses the wheel (and a built in tutorial) to try and gently ease you into the world of digital beat making. And this is where O-Music generator and I parted ways. I’ve been using step sequencing for years and it’s not that hard. What is more the traditional grid layout is so standardised across the industry that you can pick up and play a Roland 808 beat box or a Korg MS-20 and more of less jump in. So it’s a little odd to move from a standard layout to a circular one. 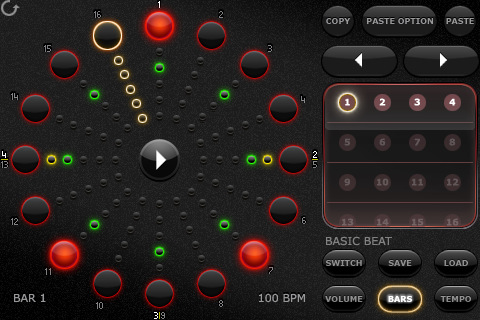 Layout issues aside, the app shows you the fundamentals of laying down a grove. However, another problem I have is that it uses conventional acoustic samples, which for the most part sound awful – the beauty of electronic music is the ability to escape conventional sounds as they are hard to accurately reproduce – after all you know what a normal drum sounds like. This makes throwing together a decent beat technically easy (you just punch it in) but for the most part it sounds … unsatisfactory.

Some chords and vocal samples are thrown in and it’s easy enough for you to knock together a passable backing track to sing along to. I wouldn’t make a serious track on it (and there are apps out there which I would contemplate using for this task) but it’s a simple way to get into throwing together beats. I would’ve been a bit harsher but the bundled tutorials, which are downloaded and not online, are very good and hold your hand through the process.