I don’t mean to use hyperbole but Impaktor is one of those apps that comes along and simply blows you away. It’s similar to seeing pinch-to-zoom or accelometers for the very first time. I always enjoy apps that invoke an “of course” reaction and that leverage the ridiculous power of smartphones to do old things in new ways.

Impaktor is a drum synthesizer that turns any surface into a playable percussion instrument. If you’ve ever finger drummed on a table or used your hands to paradiddle on your knees then you should get a kick out of Impaktor. And a snare, hi-hat and much much more. 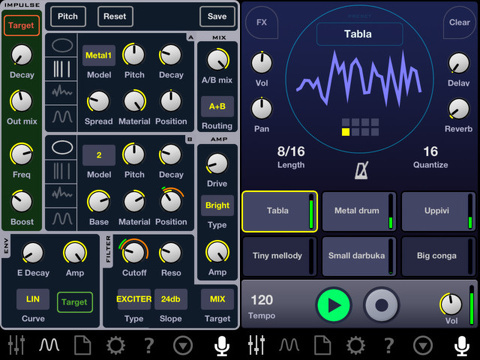 The app uses acoustic impulses from the built-in microphone as an excitation source. What that means is you can hit your desk and the app will pick up on that an use it as an input for the onboard synthesizer.

At it’s simplest level, this means you can slap away and recreate sound of a tabla, conga, woodblock or any number of presets (well 90 but they say more are coming). In an of itself this is pretty amazing. Everyone I demonstrated the app to was impressed by both the idea and the implementation.

But there’s much much more to Impaktor than a party trick. The sounds aren’t samples but are instead create by the semi-modular synth, which means you can tweak all of the parameters. The semi-modular architecture means that you can fiddle with 2 modules and adjust the routing. You can add reverb and delay to every present and modify them as you play. Almost every parameter can be modulated, so Impakor quickly goes from a quirky way to lay down a drumbeat to a powerful and interesting way to create interesting synthesised soundscapes (yes such a thing exists).

They app also comes with a 6 track audio recorder so you can layer a bunch of different sounds, and it even lets you record as you build up a track live. The finshed audio can be expoted in .wav format or audio-copied into another app such as GarageBand.

There are a few caveats. Impaktor works best through a pair of headphones but there’s no way to control which mic your iPhone accepts as an input so if your headphones have mic on them (and most of mine do) it won’t work. Also, while Impaktor works like magic, it doesn’t actually invoke any of the dark arts so it’s impossible for it to pick up on nuances of your drumming. This like hand positioning and various taps and rubs are sadly ignored so the drumming expereience isn’t quite as full as I would like.

However these are small niggles in what is an amazing and fun addition to the already powerful number of ways that exist to create music on your smartphone.