As a Lakers fan and semi-regular reader of LakersNation.com, I was thrilled to hear that their iPhone app had been released. One of the primary reasons I’m only a semi-regular reader is that their website, isn’t exactly iPhone friendly when it comes to load times. The iTunes store listing revealed the true name of the app, “L-Nation,” which while I’m sure is convenient in terms of avoiding licensing fees, is not the most intuitive name and limits accessibility to less diligent web-combers than myself. Renaming the app to “Lakers Nation” and providing a link for direct download at the Lakers Nation homepage would nip this problem in the bud. Once I found the app, download and install was swift over 3G. Upon opening the app I was greeted with a brief flash of the Lakers Nation coat of arms followed by the home menu, pictured below.

My initial reaction was “pixels”. The biggest shortcoming of the app is its low resolution. It is clearly not built with iPhone 4 users in mind, and the pixilated opening screen, menu, and top banner glare in sharp contrast to the crisp native text. Image thumbnails are particular point of contention. However, The ad bar is also the victim of low resolution, but is not very intrusive. After all it is a free application and the fine folk at Lakers Nation need to butter their bread somehow. 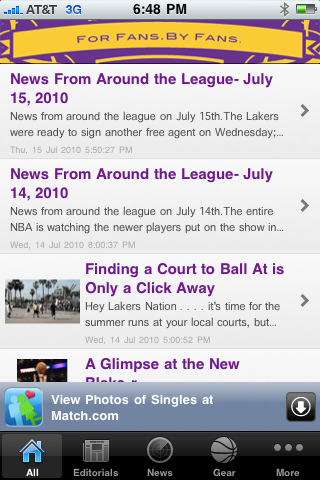 It’s not all bad though, L-Nation shines when viewing an article. Once you tap in the gorgeous hi-res iOS4 text dominates the landscape and its easy reading from there. In-article photos look decent despite still not being at full resolution, but this is a sacrifice I’m willing to make for faster load times.

Newsfeed updates and article load times could be speedier, but blame that on AT&T. Everything loads lickity-split on Wi-Fi.
Another great feature is the twitter button on the home page, which immediately puts you on the Lakers Nation twitter feed without having to bother with switching over to a twitter client.

Overall I praise the functionality, and more importantly the content of the application. However its visual shortcomings seriously detract from the experience of the iPhone 4 user. Renaming the app “Lakers Nation” so folks can actually find it and adding hi-res graphics are definite musts for version 1.1.