Need an iPhone app to follow soccer from around the globe? The iFooty app gives you the ability to follow the English Premiership League, Premiere League, Champions League, UEFA Cup, La Liga, Serie A, Bundesliga 1, Dutch Eredivisie, J League, Brasileirao, Copa Libertadores, Gold Cup, World Cup, and many more leagues and cups from around the world. Once you open the iFooty app, you’re prompted to pick your league. From there the app updates to show you statistics, team news, results and fixtures. You can go back and change your league which then changes everything in the app to pull information about that league.

The today section shows you a play-by-play list along with the scores for matches played on any given day. 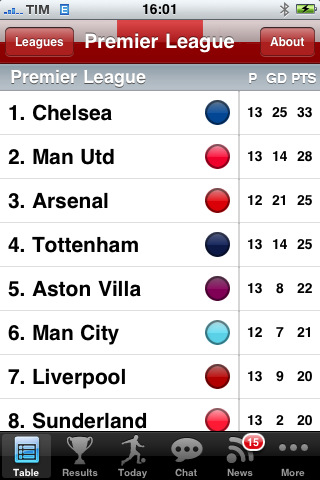 iFooty works on the iPhone or iPod touch, as well as on the iPad. The app is free to download and is developed by Jeremy Debate. In the latest version of iFooty you can now watch soccer videos and pull down to refresh the results.

The iFooty app has all the bases covered, you get the current standings table, league news feeds, and more. There is even a chat room where you can talk footy with other fans from around the world. The chat area has multiple rooms and new rooms are created to discuss recent matches. Great to watch the chat room during live games for conversations.

In iFooty, it isn’t possible to tap on a team and get in depth information about that team, such as players, stats or sorting the data as of right now. 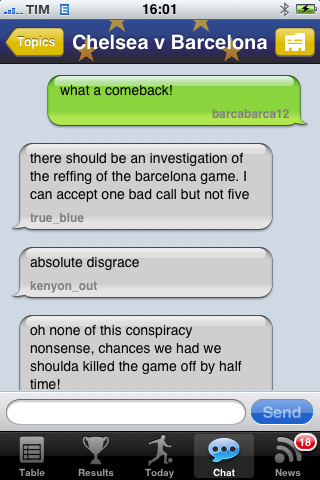 Some users on the App Store have reported crashes with iFooty, but I have not seen this issue myself. The latest 2.1 update which was released on March 3rd 2011, might have fixed the crash bugs reported there. Finally, one of our users on AppSafari is reporting that the iFooty chat room is not moderated well, meaning you’ll probably find foul language there. There is a feature now in the app that lets you flag inappropriate chat comments by swiping and tapping the red x button. Another feature added is the ability to verify your account with Twitter or Facebook, although it is not required.

iFooty covers not only the EPL but a ton of other leagues, so you’re probably covered unless you’re looking for more rare stuff. The only issue is that you have to keep switching between leagues which is not that big of a deal really. If you’re looking for an app dedicated to following soccer, iFooty is a good choice. If you don’t like the ads in iFooty, there’s an iFooty Plus which sells for $2.99 but doesn’t have the goal alerts service. The ads are not that bad really, so I would recommend sticking with the free version.