Ferris Bueller once said, “Life moves pretty fast. If you don’t stop and take a look around once in awhile, you could miss it.” What Mr. Bueller didn’t mention is how important organization skills are for keeping track of that fast paced lifestyle. I mean, think about it. Do you really think he would’ve been able to pull off all of that in just one day without at least taking a few notes? I can only imagine how much he would’ve gotten done if he had an iPhone with Paperless on it.

An exceptionally elegant organization tool, Paperless is a dead simple and fantastic app for keeping track of pretty much anything. Paperless is a brilliant standout in the overcrowded world of note-taking and list-making apps. Deliberately basic and extremely open-ended, it doesn’t offer a ton of features, but the tools it does offer are very flexible, comprehensive, and absolutely glowing with sleek and streamlined style.

To use, just create a list, either a regular list or checklist. The developers recommend using Paperless for everything from grocery lists to book outlines, and they’ve taken a lot of care to make using the app as simple as possible. There’s a freeform field to name your list and also hundreds of gorgeous and unique icons with which to label it. From there, you can quickly add items to your list, including as little or as much detail as you like, thanks to another set of freeform fields. It’s possible to have dozens of searchable lists to have at a time, and while its minimalist approach forces you to be brief and clear with your information, but the end result is stunning and highly functional display. 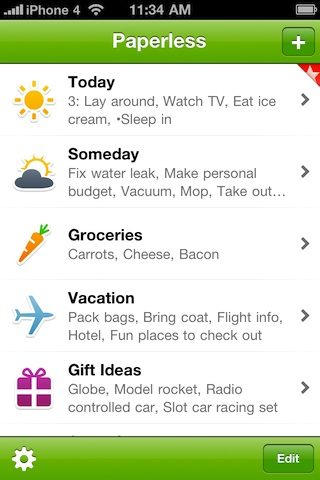 Navigating the app is a dream, as the controls are super easy to use, never requiring much more than a few intuitive swipes or taps to get around, but there’s also plenty of customization options to get everything to display or sort just so. You can easily swap items around or move the lists. There’s also a wonderful export feature that allows you to easily share your lists via email, which I found extremely handy.

Although Paperless is not as comprehensive as many other note-taking apps out there, its overall flexibility makes it much easier to implement your own organization style. The impressively polished layout makes Paperless a much handier version of a blank notepad: simple, functional, easy to use, but it’s also much prettier, easier to rearrange, and also searchable. 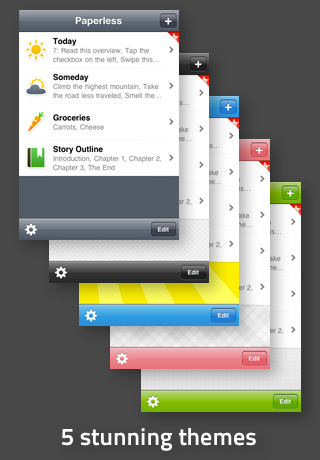 Of course, because of its basic nature, Paperless doesn’t really work well as a calendaring system, and there is no alert system in place to remind you when you’ve had items squatting on your to-do list for too long, but aside from that, Paperless really shines, both in form and function. Exceptionally pleasing on an aesthetic level and beautifully functional, Paperless is a list-making dream come true.