Need some inspiration? This iPhone app from PigLit brings you Barack Obama’s Inauguration Speech and 98 More Speeches from President Obama for you to read on your iPhone or iPod touch. Using this app you can follow Obama’s political career starting with his position as a State Senator to his rise as President.

Here is a great iPhone app that will help you get inspired, uplifted and motivated, and follow your American dream. Historic speeches of Barack Obama’s political career for you to read at any time.

What’s not so great about this app? It is missing the speeches in Audio format, so you only get them in text format. It would have been much more useful if they were provided in both formats. Obama’s voice would add a ton of value to the speeches as opposed to just reading them. 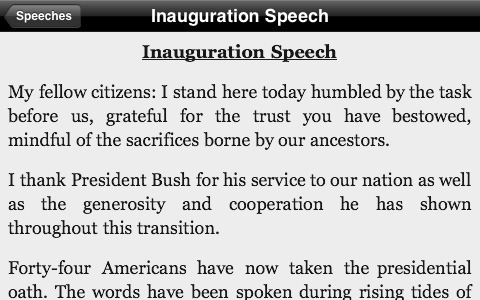 Overall a great app for anyone interested in the Speeches of President Obama and his political career. You get 99 speeches for 99 cents in an easy to read format, so you really can’t go wrong here.