Are you in the market for an iPhone app to help you keep up with your favorite television shows? Do you find yourself constantly commenting on your friends’ Facebook status updates about television shows? Were you devastated when your favorite American Idol contestant got the boot and needed to talk it out? We’ve checked out several iPhone and iPad apps that remind you to watch your favorite shows and help you discover new ones. As a bonus, social networking is included in several, so you can stay in touch with your friends. 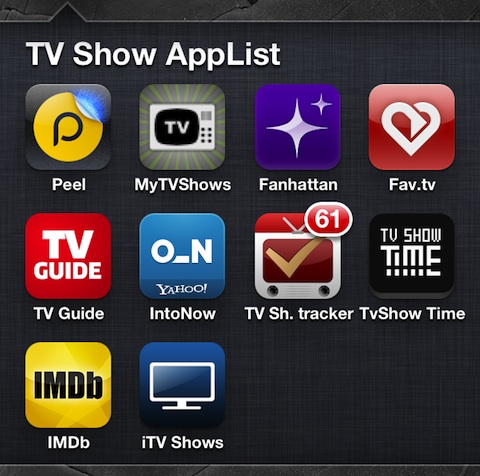 Price: Free
By: Peel Technologies, Inc.
AppSafari Rating: 4.5/5
Peel’s iPhone app combines social networking and a customized television guide. The customization begins, when Peel opens and requests your zip code and communications company. You can opt in and out of creating a Peel account, but it is required to fully embrace the social networking capabilities built into this smart iPhone app. With two sort and filter menus, you can choose the types of shows you like. With this information, Peel will suggest television shows that you may like. The highly-functional interface for customization is intuitive and impressive. Once your preferences are identified, television shows and times are presented. If you want to browse different topics, you can sort and filter with a nice dial at the top of the screen. If you run across a show you like, you can set a reminder–a very cool feature. You have the opportunity to rate shows, share comments, and gossip via your Peel account. With the Peel app on your iPhone, you will never have to scroll through those cumbersome television guides again!

Price: $0.99
By: Gummy Bear Studios
AppSafari Rating: 1/5
My TV Shows! iPhone app’s intention is to help you keep up with your favorite shows and add them to your calendar. However, this app is slow to load, and it does not provide meaningful content. You open to a blank screen and a bar at the bottom of the screen for navigation. After tapping three icons with no results, I finally hit the search icon. You add a television show name, and the My TV Shows! iPhone app accesses your wireless connection to get show data. The data is stored on your device to access offline, but I didn’t find the app to be more functional after the download. The show information is sparse and unexciting. The graphics are grainy. You can add your preferred shows to your iPhone calendar. Overall, My TV Shows! iPhone app doesn’t compete with other TV show iPhone apps.

Price: $1.99
By: iSnoop.fr
AppSafari Rating: 3/5
i.TV Shows iPhone app may very well be a decent tool for keeping up with your favorite television shows. But, its performance lags, and the visual impact is boring. The i.TV Shows iPhone app does start with a thorough, clear guide to help you maximize its tools. You simply add shows and wait for details to download. You can scroll through lists of the episodes and mark those you’ve watched. If episodes are available on the iTunes store, you have the opportunity to link with the iTunes store and download them. Additional features include the opportunity to mark favorite series and set pop-up reminders for your preferred shows. The coolest feature is the Genius button that lists shows you may like based on your favorites. For the money, i.TV Shows iPhone app needs to improve its delivery of content and add functionality for a more engaging experience.

Price: Free
By: Fanhattan
AppSafari Rating: 3.5/5
If you are a movie fan and love to talk about it with your social networks, then you’ll want to give the Fanhattan iPhone app a whirl. You sign into Fanhattan via your Facebook account. Then, you dig straight into a wealth of television shows and movies at your fingertips. Fanhattan gives you great descriptive information about shows and movies, as well as your options for viewing immediately. It gathers information from the iTunes store, Hulu, Netflix, Crackle, ABC iPad app, Amazon Video on Demand, BlockBuster Video, Cinema Now, Playstation Network, Vudu, and Zune. The functionality and interface of the Fanhattan iPhone app is high-energy and dynamic. It is not necessarily easy, but it has some forward-thinking features tech junkies will love. The Fanhattan iPhone app brings cutting-edge performance and social networking to a sofa near you.

Price: Free
By: Fav.tv, Inc.
AppSafari Rating: 3.5/5
fav.tv’s iPhone app is Facebook for television show addicts. You can sign in via your email, Facebook account, or Twitter account where you are greeted with a news feed of the latest chatter about your favorite television show. fav.tv does the hard work of maintaining a running list of television shows to watch. Once you follow a show, then new episodes are automatically added to your list of shows to watch. It also incorporates a television guide that can be filtered easily. Like Twitter and Facebook, your fav.tv co-horts can direct message one another. Adding a touch of Pinterest, you can “pin” your favorite shows to your main menu. You’ll be reminded of the show with a fun graphic and pertinent details. The fav.tv iPhone app has a familiar interface, in that it has qualities similar to other popular social networking sites. But, more than that, the graphics are fresh and modern. fav.tv’s iPhone app brings an integrated, interesting perspective for the incredible price of free.

Price: Free
By: TV Guide
AppSafari Rating: 1.5/5
TV Guide’s universal app for iPhone and iPad is no different than the TV Guide that arrives with your grandmother’s newspaper. And, that’s not saying much. The ad is placed at the top of the screen, and it’s the only thing that catches your eye. Also, because of the ad placement, you’ll frequently hit the ad by accident during navigation. You set up your zip code and service provider to get the TV Guide on your iPhone and iPad. There is also an opportunity to check out television show news and photography. If you don’t want to walk across the room to get the remote to turn on the guide on your plasma screen tv, then I suppose the TV Guide universal application would be useful.

Price: Free
By: IntoNow
AppSafari Rating: 4.5/5
IntoNow by Yahoo is an innovative, exciting app for iPhone and iPad to connect with television fans worldwide or with your social networks only. The coolest feature of IntoNow is its use of voice recognition software to identify the show you are watching. You press a button, and your iPhone and iPad does all of the work. Voila, your television show is identified. You can see everyone else who is watching the movie, or you can adjust to just your friends with one touch. At the bottom of the screen, you have the opportunity to chat about shows, rate shows, and share with your Facebook timeline and Twitter feed. IntoNow’s universal app is fun, simple, and loaded with social functionality for the amazing free price tag.

Price: $1.99
By: Pixel-Perfect Widgets
AppSafari Rating: 4/5
If you want a simple, efficient iPhone app to track your favorite shows, then TV Showtracker! may work for you, It has a basic list interface where you press plus, add a show, and the show’s episodes download to your iPhone. The television show has a nice graphic and detailed information for each television show. You can preview an episode, read about the plot, and connect to the iTunes store to download. Similar iPhone apps have all of the same functionality for free. But, if you want to cut out social networking and ads, the $1.99 price tag for TV Showtracker is reasonable. Pixel Perfect offers an easy, attractive television show iPhone app in TV Showtracker.

Price: $0.99
By: Toze Labs
AppSafari Rating: 4.5/5
Have you ever recognized a guest star, but just couldn’t place him or her? Are you obsessed with television show details? Do you like to be the first person to discover a new television series or star? TV Show Time is the perfect iPhone app for television lovers. You connect via Facebook and Twitter to share with your existing social network, and you also have the opportunity to check out ratings and recommendations of the TV Show Time social community. The TV Show Time iPhone app not only keeps you on top of your favorite shows, but also exposes you to other shows that may be interesting. The flow and interface are attractive, modern, and efficient. It is easily navigated via the smartly designed icons at the bottom of the screen. The TV Show Time iPhone app is the most expensive on this list and shares much of the same functionality as some of the free apps on this list. TV Show Time’s iPhone app is distinct in its clean, easily managed design and its incredible, vast content.

Price: Free
By: IMDb
AppSafari Rating: 4/5
If you love IMDb, this is the one and only iPhone app you’ll need to satisfy your television addiction. The IMDb app combines news, extremely detailed television show information, and social networking. It is a visually appealing and nicely organized interface. For each television show, a list of relevant details like show description, television stars, writers, user reviews, parents guide, news, etc. is presented. You’ll appreciate that you just touch the screen to open up details. Although a wealth of information is available, you get to choose how much you want. For a free iPhone app, it is packed with function and uninhibited by ads. IMDb’s iPhone app is a solid choice.
AppSafari review of Best iPhone apps for Tracking and Discovering TV Shows was written by Jenni Ward on February 16th, 2012 and categorized under App List, TV. Page viewed 9220 times, 2 so far today. Need help on using these apps? Please read the Help Page.