Vintage. It’s a magical word. It conjures up this dreamy sort of past that never really existed, but if it did, it would be infinitely cooler than anything else out there. Cooler than cool. The ultimate cool. This isn’t a stodgy sort of past that smells like grandma’s house. This is a mythical past of epic rock concerts, killer sideburns, and gorgeous soft-focus photography.

The photography bit is really the only aim of Hipstamatic, although I imagine the thrift store t-shirts and ironic mustaches aren’t that far removed. That said, I really liked this easy to use photography app, perhaps because its artistic intentions helped to cover up the myriad of flaws inherent to most iPhone photos. 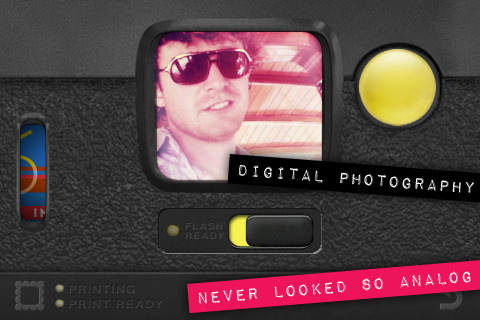 The app aims to recreate the toy camera aesthetic that reached its heyday in the 70’s. Just to be clear, toy cameras aren’t toys; they were cheap, mass-produced film cameras. Everything, even the lenses, were made of plastic, which is what produced their often strange, but frequently admired optical effects. There’s been a recent revival of toy camera interest, and you can find tons of amateur and professional photographers working with them today.

Since developing actual film is quickly becoming obsolete, Hipstamatic makes this process much simpler for would be toy camera enthusiasts by recreating it digitally. Fire up the app and you have your choice of “lenses”, “flashes”, and “films” which you can change either by swiping along the screen or accessing the menu along the bottom. There isn’t a huge variety, but they also have a few cheap “Hipsta-Paks” you can buy, if you want more options. Once you’ve got the settings how you like them, click the arrow to flip the camera around, and then snap your picture, but be mindful of the little viewfinder! 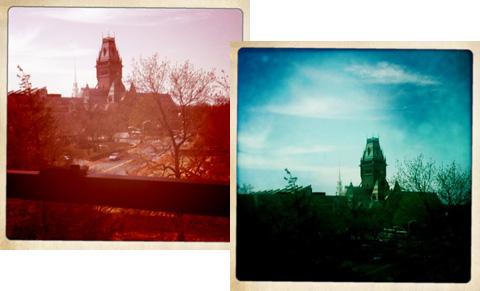 Unlike most digital photos of today, the pictures that emerge from Hipstamatic won’t be perfect. The “lens”, “flash”, and “film” will all have added their own unique effects. The pictures I took made it look as though I was shooting through a window to the past. Everything was distant and somewhat hazy, but also attractive in an aged sort of way, like photos from a prized, but yellowed album. Plus, I had the option of uploading straight to Facebook or Flickr, so much more convenient than those old albums.

My only real complaints about Hipstamatic are that it’s a little slow to load and you can’t apply any effects to pictures you’ve already taken. You either have to shoot with Hipstamatic at the time or you’re out of luck. You’ll also still be limited by the inadequacies of the iPhone camera, but there’s not much they can do there. At least now you can claim your fuzzy focus and weird lighting was deliberate, because you’re a cooler than cool, vintage artiste.