Living around Los Angeles gives you an unfair advantage when it comes to spotting celebrities. As long as you frequent the right places, LA is a seething microcosm of falling stars. Upon spotting one, those brave enough to venture forward and inquire after a photo/autograph (politely, mind you) might see their efforts rewarded. Of course, if you’re anything like me, you won’t have a pen or a scrap of paper on you when you do see one. That’s where Sagomas’ VIP Hunter comes in. 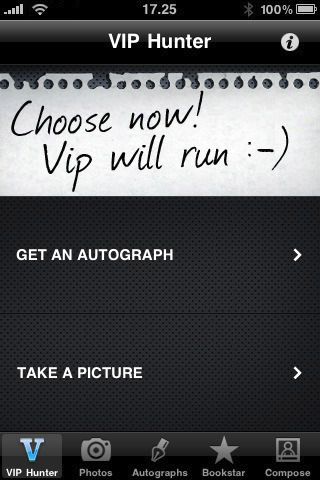 An iPhone’s touch-sensitive screen provides the perfect surface with which to capture an autograph: no need to carry around a pen and paper, just pull your device out, launch VIP Hunter, and choose Get An Autograph. The person you have requested it from can then use their finger to imprint their name on the white screen (although I suggest using a stylus for ease and frankly, clearer script). Tap the green check mark to save it. Be sure to choose a Category, because that is what they will be broken down into and listed under in the Autographs tab. 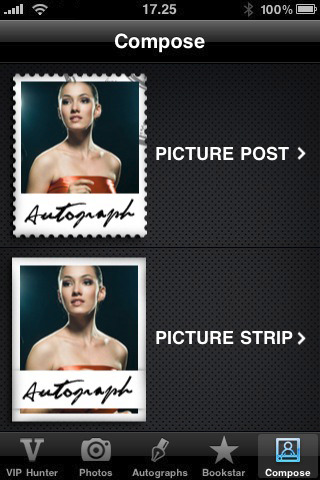 If you have a camera on your device, you can also take their picture with the built-in camera feature. Both autographs and pictures can be shared with the public through email, Twitter, and Facebook; watch everybody else turn green with envy. VIP Hunter also has a Compose tab, in which you can combine the photos with their respective autographs. There are four compositions you can choose from, the end results of which will be saved in the Bookstar tab.

VIP Hunter is a fantastic concept, especially for those who live around heavily celebrity-populated areas like LA or New York. Splitting the photos and the autographs is a great idea, so you won’t have to worry about having them sign all over their own faces. I do wish there were more composition choices and flexibility (the option to adjust the photo at will, instead of having the app do it for you), but what’s provided gives a sleek melding of photo and script. If you have an iPod Touch, you can still choose photos from your Photo Library, so just make sure to have your digital camera on hand. With VIP Hunter, you won’t ever have to miss out on star-studded moments (who knows, you might even impress someone)—that is, if you’re willing to shell out $1.99.