Jailbreaking is one of those things in life, while risky, can have big payoffs. FolderEnhancer pays back dividends with its ability to allow you to maximize your iOS organizing power by removing some of the “restrictions” set forth by Apple on how many apps you can place in a folder. Additionally, it has the added bonus of folder nesting (subfolders), something I personally have wanted for some time now.

FolderEnhancer from Cydia does folders the way they should have been from Apple from the get-go by giving one the ability to put a virtually limitless number of apps in a folder. When a page in the folder gets full, you can horizontally scroll to the next page with the same visual cues and interaction you expect and are familiar with on the HomeScreen. 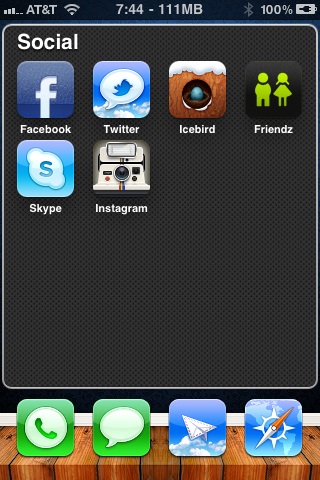 As if the app wasn’t great enough and didn’t already feed your obsessive compulsive need to organize every single app in every single manner first by category than by color followed by name, it does this all really really fast by overriding the default folder user interface. Don’t worry, your favorite peak-a-boo folder icons are the same; their chasmic open state is what changed. A simple (and larger) white-bordered pane springs open as if from nowhere, displaying your shiny apps in their perfect peking order. I would say folders now open about 50% faster than before (don’t quote this highly guestimated estimate).

If you needed one more reason to go jailbreak, FolderEnhancer is it. It and MyWi are the two returns on investment I’ve received and use daily with my jailbroken iPhone 4.

You can purchase FolderEnhancer from Cydia right now. It costs $1.99 and if you have bought CategoriesSB before you save 99 cents. FolderEnhancer is created by Lance Fetters (@ashikase)

Use iPhone mods and hacks at your own risk! Installing 3rd Party iPhone apps requires you to jailbreak the iPhone before installing the native software and apps. Browse the full list of all iPhone and iPod touch jailbreak apps filed under the software category.