Looking for an iPhone app to help you learn Chinese words and phrases? I suspect that China would be a more viable vacation prospect for many if only the language barrier weren’t so high. Neither based in Latin nor any of the romance languages, it’s little wonder that Chinese is reputed to be one of the most difficult languages to learn. If you don’t want to devote a good few years to learning all the intricacies of Chinese, you can give this helpful app by Nagaraja Rivers a try: Speak Chinese Fun Phrasebook (of course, this’ll probably work best if you actually have some knowledge/background).

The Speak Chinese Fun Phrasebook houses over 500 words and phrases in many categories, including: 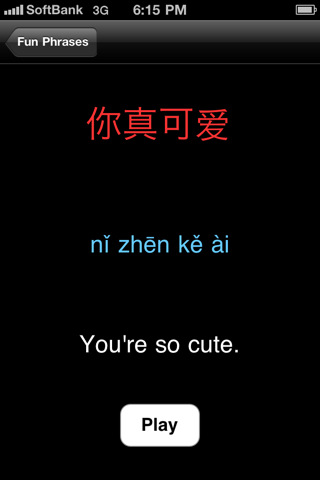 …and quite a few more. Once you choose a category, you will be taken to the corresponding list of words and phrases. Tapping on one will bring you to a display page with the word or phrase written in simplified Chinese, Pinyin (phonetic transliteration that includes tone marks), and English. If you want to hear the word or phrase (and this is key if you have no idea what the tone marks signify), just tap the Play button for the word or phrase spoken by a native speaker. Go through as many as it takes to become comfortable, but if you’re serious about learning to say everything, I suggest you practice with someone who speaks Chinese. 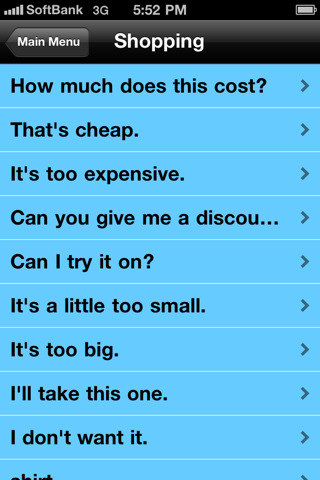 I love that this app does not require an internet connection; I can carry it anywhere around a foreign country without having to worry about a connection. Functionally, the app is very straightforward; the only real confusion would come from trying to learn Chinese, I’d wager. The Phrasebook is also an excellent refresher for those who have previously learned the language and are trying to brush up on vocabulary or pronunciation. The native speaker is quite succinct, although to achieve that she had to speak half as fast as anyone holding a real conversation would. Be prepared to be verbally run over if you’re going to China–nothing beats real world practice.

On the written note, as a student and advocate of the traditional style of Chinese, I am slightly miffed that only simplified is offered for display. I understand that it is somewhat the unofficial standard now, but would strongly suggest that traditional also be included. From my experience, it is a lot easier to identify simplified characters once you know traditional than vice versa. I’d also like to know if this app will be updated with new words and phrases. Nagaraja Rivers offers Speak Chinese Fun Phrasebook for $2.99, which would be a real bargain if updates were included. Nonetheless, it would be an extremely handy tool to have around if you’re trying to navigate China.