iBomb. Probably the most self-revealing name I’ve ever seen. Every action movie, every action game, every action tv show, what do these have in common? BOMBS! iBomb gives you the chance to set a bomb on your friend’s table, in their backpack, or any other horribly inappropriate place to surprise your friends. It gives you the challenge to diffuse a bomb before you set off a number of different setting challenges. Released by Bonobo, iBomb is available on the iPhone, iPod touch, and iPad for $0.99.

So basically, the gameplay consists of touching 4 screws at the outer edges of the screen, sliding your finger across to remove the face, then snipping either the blue wire or the red wire. The way this game shakes things up is to give different challenge settings. You have yourself a motion sensor, which blows up the bomb if your iDevice moves, a countdown timer, which blows up if you run out of time, a sound detection mode, which blows up if you make a loud enough noise, and finally, the speed mode, where the iPhone blows up if it’s traveling at a specific speed. 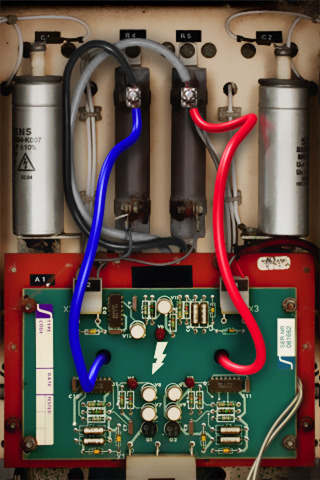 To set up a bomb, you touch the red buttons to choose your bomb style and then you can tap the gray display to change its settings around. For example, a timer bomb that goes off in 30 seconds, 1 minute, 2 minutes, or even 30 minutes. That’s pretty much it.

One thing I wonder about is the graphics. Graphically, this app has some realistic images. I have no clue how accurate the inside of the bomb looks like to a real bomb, but I can’t say that I approve of the realism. I would rather have seen a more blatantly fake image rather than this one. Granted, I have no idea how accurate it is, but I rather not have anything helping out those kinds of people. It does look fairly good though since it does look extremely realistic.

The option list is incredibly limited, the sensors for the motion and sound are fairly weak, though I believe it’s because of the iPhone’s own sensitivity rather than the app itself, and the timer never gives too much of a challenge after the first time you play. If you are caught off-guard by this app and someone said “diffuse this” and you had 30 seconds, yes, it would be difficult. Then the novelty wears off, you can diffuse it with one hand, and just choose a wire randomly.

On the off chance that someone you know would be surprised by this game, this one would provide a second of suspense or surprise, then the bomb goes off accidentally because they made a noise or touched the iPhone too roughly, and the app is done. iBomb is what it is right from the beginning: a bomb on your iPhone. Interpret that how you’d like. Sorry, but don’t spend a dollar on this app yet who knows, they might actually add more content to this app.