Did you know that sheep like to gather in giant coliseums tossing bombs, blast-proof vests, and sneakers at each other? BattleSheep is Bomberman style top-down bomb exploding extravaganza. Released by AppMania, BattleSheep! Is available on the iPhone 3GS, iPhone 4, iPod touch (3rd gen), iPod touch (4th gen), and iPad for $0.99.

You have yourself some fluffy little sheep and there are bombs everywhere. If you press the only available button on the screen, you grab onto bombs on the field. Press the button again to toss the bomb in the direction that you are facing. The bombs will turn red when they are about to explode, so the goal is to grab a bomb, wait until it turns red, then throw it into the hands of the other sheep. The bomb will explode because the opponent sheep will, for whatever reason, hold onto the bomb.

Most of the time, sheep will kill themselves by holding onto a bomb for too long or just walking near a bomb when it explodes. The main goal is for you to actually kill the enemy to gather a higher score. The way the gameplay works is a bit confusing since I really don’t understand why the enemy never seems to try to kill me, they just randomly scamper around getting themselves killed. Even if you just evaded everyone, you can pretty much just wait and the sheep will narrow themselves down to 2-3 and then you just have to kill those sheep. 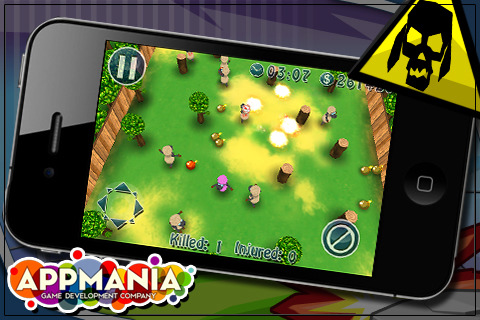 Graphically, BattleSheep looks alright. The grass, trees, and fence aren’t bad and the sheep are cute, so overall, the graphics are well done. The sounds and background music are your standard semi-repetitive noise that you will barely pay attention to. Together, the music, graphics, and gameplay never stand out, never pops out in your face, or add any true excitement. It just felt forgettable. The game can pretty much play itself, there isn’t any real challenge, and after a while, I just decided to stop playing and do something else.

What if BattleSheep played quickly with the same style as Bomberman or if they made it so that maybe the bombs could chain off each other? Maybe you could destroy environment elements, collapsing them to kill the enemies or block them from escaping another bomb’s explosion? This is an average game at best. Play it if you really like the sheep theme and are a fan of Rocket Sheep Rampage or Sheep on Trampolines. Otherwise, it’s average and in desperate need for some ‘sheer’ action! … Ok sorry, that was lame.

Here is a video demo of the BattleSheep! app on the iPhone