Although the name of People and Dream’s game app, BloodyRush, is a bit off-putting, one cannot deny the entertainment value of dressing like an Incredibles character (topped with a Luchador mask, no less) and running around the rooftops of a dark city trying to stay alive. There are four obstacles that stand in your way, and you have four actions that are specific to each obstacle: jump to avoid toxic barrels, slide to avoid floating morning stars, kick small monsters, and deliver an uppercut to big monsters (and don’t forget to jump when there are gaps between buildings…falling to your death is no fun, either). Keep an eye on your health bar on the top left. 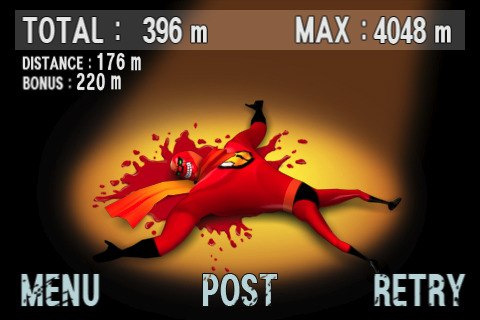 To jump or slide, slide up or down, respectively; to kick or punch, tap the bottom of the screen or the top. All four controls are touch-based, which makes this game app seem simple and easy, but staying alive might be a bit harder than you think. BloodyRush is a game of timing rather than strategy, and as the running gets faster and faster, you’ll have a more difficult time keeping that health bar full. Nonetheless, for a game with only four controls and one level, BloodyRush is surprisingly addicting. The gameplay is slick, the graphics are pretty good (especially the city backdrops)–and not without a touch of whimsy, as one realizes that both types of monsters wield fearsome lollipops–and the background music adds to the overall fun without being annoying.

Some would say that there needs to be more added to the game (more characters, more levels, more action, etc.) but BloodyRush is a pretty great game as is, and perfect for those idle times when you just need something simple to fiddle with.