Another in a long of classic games ported to the iPhone, Rayman 2: The Great Escape is Gameloft’s latest effort. Released in 1999 for several consoles, it quickly became a favorite with its (then) trailblazing 3D graphics and awesome gameplay. In the iPhone version, Rayman is still a limbless hero that runs, jumps, and hurls orbs at his enemies (robot pirates) in different environments to save his world, The Glade of Dreams.

The controls still consist of a joystick and two buttons, but all three are now virtual: the joystick on the left, the blue Jump button and red Attack buttons on the right (while in an underwater environment, they become Dive and Surface buttons). All three are used in this platform game to save friends, collect Lums (which have a whole back-story that can be found in the Help section) and masks of Polokus, and solve puzzles in level after level. Rayman even has helicopter hair (tap the blue button twice to start it)! Stopping by square stones will give you clues as to how to use the controls or help you win the game. Dragging your finger across the screen rotates the camera view, while tapping the eye icon on the left side of the screen will give you the view from Rayman’s eyes. 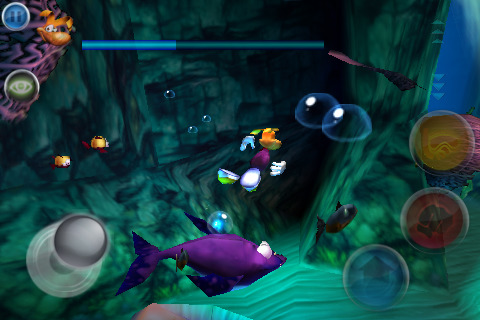 The iPhone version of Rayman 2 is definitely a blast from the past, as it sticks pretty close to its platforming origins. The 3D graphics look nearly identical to the original game and are excellently rendered for iPhone, making running around in an interactive environment interesting; even the soundtrack is fun to play along to. Unfortunately, where iPhone app’s Rayman 2 falls short is with the controls–especially the joystick–which are tenuously accurate and not easy to intuit (includes moving the camera view and the multi-touch targeting). The game is challenging enough to truly be frustrating when the controls don’t act the way you expect them to. Also a major fail is the fact that there are no save checkpoints; the game is saved only after a level is completed, so say goodbye to your level if you get a call or a text in the middle (or the end) of playing.

Rayman 2: The Great Escape has as much potential back when it was released in the 90’s as it still does now, but unlike the classic, the iPhone version ultimately falls short of expectations.

Here is a video demo of the Rayman 2: The Great Escape app on the iPhone